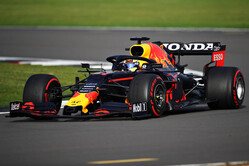 Red Bull has taken the wraps off its 2021 contender, the RB16B, ahead of its track debut at Silverstone.

On the surface the first images of the new car suggest that not too much has changed over the winter. And while the deferral of the new regulations to 2022 means that indeed there is a lot of carry over, the Austrian team is keen to dismiss the thought that its designers "have been lounging about on comfy pillows all winter".

Far from it, as under the skin the RB16B features plenty of changes that maintain F1's status as a serial battle of the boffins.

One of the major changes for this season is of course under the engine cover. For its final season in F1, Honda is introducing a new power unit and it's this heavily revised beast that Max Verstappen and Sergio Perez will get a first taste of tomorrow when the pair will put the car through its paces for the first time during an official filming day at Silverstone.

Test and reserve driver Alex will also be on hand, gathering feedback and driving an RB15 as the team gears up for the new campaign.

The filming day will give the Bulls a first indication of what they can expect when they head out to the Gulf state for this year's sole pre-season test which starts on 12 March.

The day will be of particular value to Alex Albon. As well as driving an RB15 during the filming day he will be heavily involved in sifting through the feedback on the RB16B from Verstappen and Perez. This will give him plenty to work with as he prepares to help car development through the 2021 season.