Horner: We've taken control of our own destiny 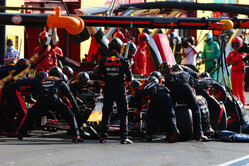 Christian Horner insists that purchasing Honda's engine technology was a no-brainer, as the Austrian team now controls its own destiny.

The energy drink company Red Bull, today joined Mercedes, Ferrari and Renault not just as a constructor but as an engine manufacturer supplying its own team, at least from next season.

Considering the problems the team has encountered with engine suppliers over the years - those four successive titles with Renault seemingly long-forgotten - supplying its own engines - or quitting the sport - was always really the only option.

While the sceptics eagerly await the day Christian Horner and Max Verstappen start criticising their own engines and threaten to quit F1 unless they can be guaranteed a winning alternative, the Austrian team is looking at the positives.

"We have taken control of our own destiny, in respect of integrating power unit with chassis," Horner told reporters in a video press conference.

"We've got the short-term scenario of the existing regulations and then of course whatever the new regulations are, we need to be in a position to take that on as well," he added.

"Strategically this is a big commitment by the group, it shows their commitment to F1 as well. To bring it on site, on campus here in Milton Keynes is an enormous undertaking and one which truly integrates the Power Unit into the chassis."

Having made clear that it would not buy Honda's IPO unless there was a freeze on engine development, having got its way the next hurdle for the Austrian company is the new formula planned - though as yet undetermined - for 2025.

"We will have a facility capable of designing and operating the next generation of engines with a facility that will be invested within here."

"We won't be beholden on having a partner so we've got the independence to do it ourselves," said Horner, admitting that Red Bull would be open to working with another manufacturer in the future. "If an exciting partner comes along then of course it makes sense to look at it very seriously, whether that be an OEM or another type of partner, a battery manufacturer or whatever. It really depends what the regulations are," he said.

"It puts us on an even keel with the likes of Mercedes, Ferrari and Renault," he said. "You'd have never thought we could have done what we've managed to achieve over the years with the chassis. The challenge now is to try and replicate that within the power unit."