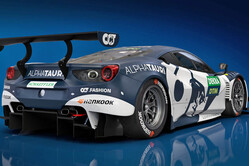 Since winning its debut race in 2016, the turbo-engine 488 GT3 has become one of the most successful models in Ferrari history, with a current overall and class tally (through January's Gulf 12 Hours) of 355 victories, 640 podiums and 91 championships across 636 races.

Additionally, the AF Corse team has earned numerous titles in the World Endurance Championship, alongside their wins at Le Mans.

"This challenge started thanks to Gerhard Berger, the idea is his," said team principal and owner, Amato Ferrari. "In a short time, we have reached the agreement to work with Red Bull with great enthusiasm.

"We have just one ambition: victory," he added. "Considering the brands involved, all the requirements are there to aspire to be successful."

Red Bull's most recent DTM involvement was with two-time champion Mattias Ekstrom during his last years in the category. Now kiwi Liam Lawson will run a full season in one Red Bull cockpit, while Alex Albon and Nick Cassidy will share driving duties in a car carrying the colours of fashion brand, AlphaTauri.

Lawson captured the 2019 championship in New Zealand's open wheel Toyota Racing Series, which has seen names like Lance Stroll and Lando Norris claim titles on their way to seats in F1. After winning two races in F3 last season, the 18-year-old will run a dual program in 2021, including F2 as well as the full DTM season.

"GT racing is going to be very new to me," said Lawson. "I am super excited for this opportunity in such a high-level series with world class drivers, and to team up with someone who has top experience like Alex. I'm also super excited to drive the Ferrari."

"DTM is a great series with highly talented drivers in the field and exciting racing," said Albon, who will continue with Red Bull as test and reserve driver in addition to his new DTM role. "I've only driven a ‘tin top' once back in 2015 when I was nominated for the Autosport BRDC Young Driver award, and they're really different to single seaters. There's a lot less downforce and the tires are very different, so it requires a different kind of driving style. It will take a bit of time to get used to, but I'm looking forward to a new racing challenge when I'm available outside of my existing F1 commitments."

Cassidy is a two-time champion in the Toyota Racing Series with titles in 2012 and 2013, and he went on to claim the "triple crown" of titles in Japan – Super Formula, Super GT and All-Japan Formula 3. Now in Europe, the Kiwi is launching his maiden campaign in the Envision Virgin Racing Team and will drive for DTM subject to his Formula E commitments.

"Both Red Bull and Ferrari are leading global players that represent absolute success in the world of motorsports and beyond," said Gerhard Berger. "We are very delighted to unite these two top brands in a unique project in the DTM, where they will join forces in the effort to win the prestigious championship.

"The unprecedented collaboration of the three high-class drivers is particularly promising: Formula 1 driver and podium finisher Alex Albon, GT professional and multiple race-winner Nick Cassidy and young talent Liam Lawson in one team – it is the perfect mix, which will keep the excitement level high in the upcoming DTM season."

As DTM shifts to high-powered GT sports cars with an approach based on global GT3 regulations, expectations for the series are high.

The unique characteristic of two sprint races of 55 minutes plus one lap each, without driver changes, remains. However, among the new rules, a switch from the former standing start to a rolling, double-file start promises particularly fierce action.

The 2021 season will feature eight race weekends: four in Germany and four elsewhere in Europe, including the season opener on 18-20 June at Monza, the home race weekend for AF Corse.

A home race weekend for Red Bull will come at Austria's Red Bull Ring in early September, with the traditional closer at Hockenheim on 1-3 October.