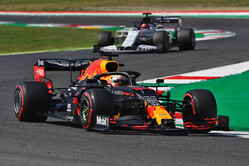 Though this year's cars are essentially last year's cars carried over - or around 60 - 70% - tweaks to the regulations, especially in terms of floor design, which in turn impacts the rear brake ducts and diffuser, mean that downforce will be reduced.

With McLaren needing to completely redesign the rear of its car to accommodate the switch from Renault engines to Mercedes, development tokens have been given to the teams in order that they can upgrade their cars also.

However, Red Bull technical director, Jody Egginton believes that, as ever, it will be in-season aero development that shapes how the pecking order ultimately plays out.

"At the end of the day, aerodynamics are still not heavily controlled by tokens," he tells Motorsport.com. "You could elect to do a new nose, but a nose is not going to make or break your aerodynamic concept when nearly every other aspect apart from the rearward part of the floor of the regulations is the same.

"You could fiddle with the chassis a bit," he continues. "I guess everyone other than McLaren is keeping the same PU, so their tokens go into integrating all of that. They've got to get that power unit to fit. I'm sure there's compromise and reward in there for them, so what that will do for them in detail, I don't know.

Last week, Mercedes technical boss, James Allison admitted that trying to claw back the aerodynamic performance lost as a result of the 2021 regulation tweaks has been one of the team's biggest challenges, though he understands the need for the changes.

"There was a concern that if we left the aerodynamic development of these cars unchecked then the performance would just keep increasing as it has been doing it for a number of seasons now," he said. "It would keep increasing to a level where the cars would just simply outgrow the tyres and perhaps even aspects of the circuits.

"There has been a triangular cut-out to the edges of the floor in front of the rear wheels which when you see it you'll think 'that doesn't look that big', but on its own in its rawest form if you just chop that area off your car it'll take about a second a lap away from the car."

As a result, along with changes to the rear brake ducts and diffuser, the area around the bargeboard is also impacted.

"The combination of those four effects in their rawest form, just cut-off and trimmed back in a way that the rules require, brings the performance of the car way back to sort of somewhere near 2019 levels," he explained.

"It's been our challenge over the weeks since those rules, the weeks, and months those rules were set in stone to try to recover as much of the performance as possible.

"That has been quite an entertaining ride in the wind tunnel and in CFD to try and make sure that we get that performance as far as possible back onto the car."