Haas not planning to develop 2021 car 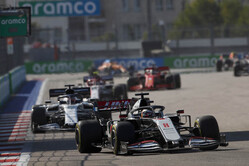 Mick Schumacher faces a tough debut season in F1 as Haas team boss, Guenther Steiner admits that all development at the American team this year will focus on the 2022 car.

The news will come as a blow to the German youngster, and his Russian teammate, Nikita Mazepin, who will have seen predecessors, Romain Grosjean and Kevin Magnussen struggle with an uncompetitive car throughout last season.

Other than an underpowered Ferrari power unit, the car was unimpressive from the get-go and in all honesty it was only a combination of strategic gambles, luck and the perseverance of its drivers that saw the American outfit finish ahead of Williams in the standings.

With Gene Haas rapidly becoming disillusioned with the sport, money is a problem and as a result there was little or no development of the car over the course of the season, instead the team said it was already focussing on 2022 and the new regulations.

Though this year's cars are essentially carried over from last season, a token system is in place to allow some development, however Guenther Steiner warns that they won't be used.

"We could have built a new nose, but we were too late," he tells Germany's Auto Motor und Sport. "The wind tunnel program had been shut down too long for us to have the nose ready before the deadline at the end of September."

However, should pre-season testing reveal any serious issues, he admits the situation could change.

"It can happen that we have to work on the 2021 car again if we discover during the test drives that we have made a mistake," he admits. "That would be plan B. Actually, we don’t want to use any more wind tunnel time for the 2021 car."

Yesterday it was revealed that due to the current travel restrictions as a result of the pandemic, Ferrari is unable to send technicians over to Banbury to install and fire-up the new power unit.