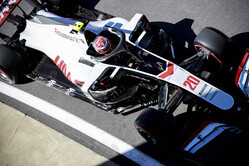 Ahead of his IMSA debut, Kevin Magnussen says the current crop of F1 cars "lack soul".

The Dane heads to the American sports car series after losing his drive with Haas, and following a shakedown of the Cadillac DPi-V.R at Sebring last weekend he says the experience put F1 in perspective.

"I've been driving an airplane, basically, for the last six or seven years," he tells RACER. "Which is awesome," he adds, "driving an F1 car is great fun... but it lacks a little bit of soul.

"There's something missing," he continues. "F1 used to have that, but coming back and driving the Cadillac has been a real eye opener.

"The sound and the way the engine responds... even the track. Sebring, it doesn't get more old school than this. It's kind of a dream come true.

"Everything I look at here is new to me. The whole car, of course, but even the language they use to talk about the car, and all the systems, and setup-wise, the language is really different. I feel at home straight away. It's been awesome to drive a real race car again."