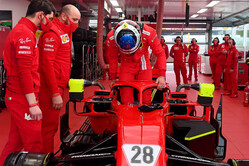 As his son gives up on his F1 dream and heads east, Jean Alesi criticises the sport for its increasing shift towards pay drivers.

A week ago today, Giuliano Alesi, son of mercurial racer Jean, took to the Fiorano track to make his debut in an F1 car.

The SF71H sported the number 28, the number used by his father when he made his debut for the Maranello outfit thirty years earlier.

Just 24 hours later it was announced that Giuliano was no longer part of the Ferrari Driver Academy and would be heading east to contest the Super Formula Lights series in Japan and the Asian GT300 series.

Following two hugely disappointing seasons in F2, during which time his best result was a 5th in the sprint race at Yas Marina in 2019, it was unlikely that the 21-year-old, was ever going to make it to F1, nonetheless his father has spoken out over the lack of opportunities for youngsters and the increasing move towards pay drivers.

"If you look at what's going on in our part of the world, in Europe, nothing is a meritocracy," he told Gazzetta dello Sport.

"All you need to do is pay, pay and pay," said the French-Sicilian who sold his own F50 to help subsidise his son's career. "I think it's crazy, it's the only sport in the world where you need to pay to play.

"I think it's a lot fairer in Japan," he added, referring to his son's decision to head east. "He'll be racing almost every weekend, something that is no longer possible in Europe, unless one pays a lot of money.

Young Giuliano has dual-nationality, French on his father's side and also Japanese courtesy of his mother, Kumiko Goto.

"Today, you need to be a billionaire to buy a Formula 1 team for your son, or you won't make it to F1," said Alesi Snr. "Many seats are blocked by drivers managed by Vasseur and Wolff.

"Fortunately there is Ferrari, which supplies engines to some F1 teams so they can also supply drivers," he added. "Mick Schumacher got his seat in Formula 1 also with his Formula 2 title, but without the support of Maranello it would not have been possible."