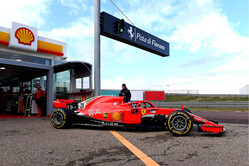 Today saw the start of five days of testing at Fiorano for Ferrari, with seven drivers involved. The team and three of the Ferrari Driver Academy youngsters were met this morning by temperatures close to freezing and even a few snowflakes falling lightly on the Scuderia's home track.

First to get behind the wheel was Giuliano Alesi, just over 30 years on from his father Jean's first test with the Scuderia, at the wheel of an F1-90. Alesi drove out of the pits at a minute after 10, in a 2018 SF71H.

The 22 year-old Frenchman sported the number 28 on his car, just as his father did when driving for Ferrari in 1991. He took a cautious approach at first because of the damp track and the cold conditions, but for his second run, the car was fitted with slicks and the Frenchman gradually picked up the pace.

An excited Jean was on hand, never taking his eyes off the Ferrari with his son on board. It was indeed a special day for Giuliano which ended in an unforgettable style the Frenchman's time with the FDA, as he prepares for his next move which will see him tackle an important race programme in Asia.

Shortly after 11, the seating position of the SF71H had been changed to suit the second FDA driver to go out on track, Marcus Armstrong. He too was making his debut in a Formula 1 car, having raced last year in Formula 2, taking two podium finishes. This year he continues in the same category, with the DAMS team.

Marcus thus became the second-ever New Zealander to drive a Ferrari Formula 1 car, after Chris Amon, who raced for the Scuderia from 1967 to 1969. He also raced for the Maranello marque up to 1970 in endurance racing and, in 1967, teamed with Lorenzo Bandini, he won the Daytona 24 Hours and the Monza 1000 Km. Marcus ran with his favourite number 9, which he inherited from his first driver coach in New Zealand, when he tried karting for the first time.

Driving almost until the sun went down in the three year-old car was last man Robert Shwartzman. Last year, the Russian won more Formula 2 races than anyone else with four victories, finishing fourth in his debut season. But today was not his debut in the SF71H, as he had driven it before in the test linked to the Road To F1 programme on 30 September 2020, along with Mick Schumacher and Callum Ilott.

These last two will be back in the cockpit later this week, Thursday and Friday for the former, the Friday only for the latter. 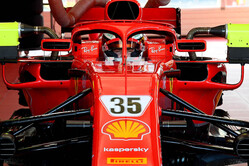 With Robert, the Scuderia carried out a more extensive programme, thanks to his greater experience, having already driven 129 laps of the Yas Marina track in the Young Driver Test in December in Abu Dhabi. The Russian sported the number 35 on the car, a number that means a lot to him, as it was suggested by karting veteran Walter Masini when Robert was only seven years old and also the one he used when he won his first world championship in that discipline.

The first day of testing was also useful for engineers and mechanics to get back into the swing of all the technical procedures as well as the precautionary measures for limiting the spread of Covid-19.

Work continues tomorrow when driving the SF71H will be Charles Leclerc, while Wednesday will see Carlos Sainz make his track debut with Ferrari.

"I'd like to thank Ferrari and the FDA for this fantastic opportunity today," said Alesi. "To be able to get in the cockpit of the SF71H was incredibly exciting as was driving the car on track with my father watching and sporting the same race number he used.

"In terms of handling, the car is not too difficult to drive, but the power was surprising and never seems to end.

"The immediacy and efficiency of the braking is also impressive. This test was the best way possible for me to bid farewell to Ferrari. Now a new adventure awaits me in Asia and I can't wait for it to start.

"Obviously this was a special day in my life," added Armstrong, "and it went exactly as I would have expected. That didn't mean I enjoyed it any the less! Being at the wheel of a Formula 1 car for the first time is always something magical and when the car is a Ferrari, then it's really unforgettable.

"People always say it's the braking that is the most impressive aspect and that was the case, but also the aerodynamic downforce, the speed in the corners, the steering, the power and the perfect gear changes are all on a different planet compared to the other racing categories. I'd like to thank Ferrari and the FDA for making this day possible and I can't wait to jump back in a Formula 1 car again in the future.

"Driving a Ferrari Formula 1 car is always a privilege," smiled Schwartzman, "and I must admit that I was beginning to miss that feeling: today, along with the team, we worked on a programme aimed at improving my ability to provide feedback to the engineers and I hope I did a good job of doing what I was asked.

"As for myself, this was the best possible way to get back to driving in the new year. I soon felt comfortable in the car and with the team as it's not even been a month since the last time and the feeling was good for all the laps I did.

"Now it's time for me to focus on the Formula 2 championship with the Prema team, but I hope that I'll get another opportunity to sit in a Ferrari again as soon as possible."