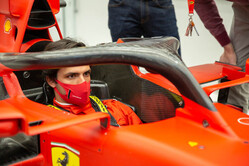 With pre-season testing limited to three days, Ferrari is still targeting a run for Carlos Sainz in the coming weeks, albeit in an old car.

While McLaren opted not to run at December's Young Driver Test in Abu Dhabi, two-time world champion, Fernando Alonso was given the green light to participate ahead of his return to the grid this season. However, the FIA refused to give permission to Sainz and Sebastian Vettel to make their debuts with their new teams.

"Of course, I'm disappointed not being able to test," said Sainz at the time, "but I have to accept it, and turn the page. I will make sure I'm prepared as much as I can be for next year.

"For me as it's only one and a half days testing for each driver next year," he continued, "the logical thing would have been to open a bit the hand, to some or to all of the drivers who wanted to take part in the Abu Dhabi test. Especially knowing it's two cars per team. To open one of the cars to at least fit the driver into a car, knowing that next year is the same chassis, and see that everything is more or less working well, the safety aspects from the jump out test, to the to the fitting of the car itself, are obviously primarily important.

"Those are the things that, thanks to the Abu Dhabi test, we would have been able to sort out and get a bit of a head start on and unfortunately, it's not happening. And obviously I'm disappointed, but nothing I can change."

The Spaniard subsequently had a seat fitting at Maranello and while there is continued uncertainty over when and where the pre-season test will take place, Ferrari is seeking to give its new boy a run in an older car if only to familiarise him with his crew and how the team works.

"We are planning to organise something for Carlos, to make sure he can speed up somehow his integration with the team, with the engineers, with the car, with our way of working, our procedures," admits team boss, Mattia Binotto.

"The simulator will be important in that respect," he admitted, "but we are currently trying to organise January time eventually, to run with an old car, just to make sure again he gets used to the team and our procedures and know the people."