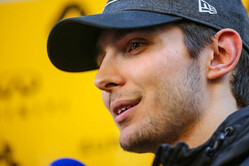 Alpine boss, Cyril Abiteboul is "comfortable" with the team's line-up for 2021, what with Fernando Alonso's experience and fierce desire to be back in the sport and Esteban Ocon hopefully building on his first season with the French team.

Other than a new name, Alpine is one of several teams that will feature a changed driver line-up this season, as Fernando Alonso joins Esteban Ocon.

The French driver was roundly out-performed by Daniel Ricciardo in 2020, and team boss, Cyril Abiteboul admits that the Australian's move to McLaren is a great loss to his team.

However, he believes that like Ricciardo, Ocon will benefit from a second season with the team, and, combined with the experience and determination of Fernando Alonso, Alpine will be stronger this season.

"There is no point in having a driver line-up that is inappropriate for where you stand as a team," says the Frenchman. "We feel extremely comfortable with our line-up, given, again, the situation of the team, what it needs to achieve.

"The mix of experience with Fernando, his desire to come back, a very fierce desire to be back in the sport and also his ability to plan ahead," he continued. "Fernando knows that the only way to win is to plan in advance and to build in advance and 2021 being a particular year where we need to balance our effort between '21 and '22.

"We have all together, with Fernando, clearly an eye on '22 and he understands that and he will be completely part of that process and that journey.

"On the other side we have Esteban, a driver who will be in his second year.

"We have seen with Daniel the benefit of the second year versus the first year and I hope that the momentum from the podium that he had in Sakhir will make him strong and able to deliver more than we have altogether in 2021.

"I feel very comfortable with our line up," he insisted, "even, obviously, if Daniel has been a remarkable asset and we wish him well with McLaren."

Pushed a little harder, in terms of what he'll miss about Ricciardo, Abiteboul said: "Well, he's given a lot. What he's given first and foremost as a driver, he's been remarkable, in particular this year.

"There is no doubt about the progression of the team this year. It's very much a credit to Daniel who's been clearly leading the charge of the team and behind him a group of people and a group of mechanics and engineers who are doing a remarkable job on track.

"Off-track, obviously we know Daniel is a great ambassador, is a team leader. He has clearly been instrumental to the changes that we've done last year when we had altogether a disappointing season.

"Frankly, when he joined we knew that it would take a bit of time, that he was not coming into a turnkey organisation," he admitted. "I think I remember those exact words said to Daniel back in the first meeting back in 2018.

"It was not a turnkey organisation but he made an impact and we are so different today to what we were two years and a half ago when we decided to form this partnership.

"So, in that respect, frankly, it has delivered. It has delivered positively and the irony in all of this is that I believe we are a much stronger team now and he will have to race a much stronger team next year and obviously all of that we will be missing but you know, we're also glad to see him in a great team and we look forward to an exciting battle against McLaren and Daniel."