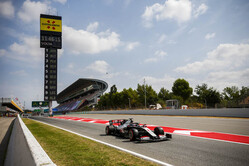 Yet to be officially confirmed, the 2021 sporting regulations see Friday practice sessions reduced from 90 minutes to one hour.

With some teams, but the majority race promoters, having made clear their opposition to plans to reduce race weekends to just two days of track action, it would appear that fans will still see less of the cars on track this year.

Article 32.1 of the 2021 sporting regulations state that: “Two free practice sessions (P1 and P2), each lasting one hour and separated by at least two and a half hours, will take place on the second day of the Event".

Furthermore, another change states that P3, while still lasting 60 minutes, must start "no less than nineteen (19) hours after the end of P2", where as previously its was eighteen sand a half hours.

While the changes have yet to be confirmed by the FIA and F1 it is believed they will get the green light as many feel the Friday sessions are currently too long.

Should all go according to plan this year's 23-race schedule is the busiest in the sport's history, though the location of the event due to take place on 25 April has yet to be confirmed.