Todt: Mercedes/Hamilton domination of F1 "bigger" than that of Ferrari/Schumacher 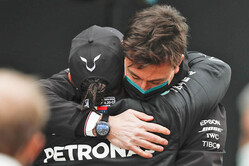 Jean Todt, who oversaw the golden era at Ferrari in the 2000s, believes that Mercedes and Lewis Hamilton's domination of F1 is "bigger" than when the Scuderia was cleaning up with Michael Schumacher.

Along with Ross Brawn, Rory Byrne, and of course Schumacher, Todt led Ferrari to 6 drivers' titles (including one with Kimi Raikkonen) and 7 constructors', during a golden era that ran from 1999 to 2007.

At a time Lewis Hamilton has equalled Schumacher's record of seven titles, the Briton, along with Mercedes has gone on to break many of the records posted by the Scuderia and its German driver, and looks set to claim a historic eighth crown next season.

At Friday's FIA prize giving ceremony, Todt recognised the achievements of both men in awarding them the F1 President Award in recognition of their "shared achievement in winning seven championships and the inspiration their sporting and personal commitments have brought to the world".

"Michael and Lewis are champions but also incredible human beings," said Todt. "Michael was always ready to support any kind of action to benefit society, for example his work on road safety. Let us not forget that, every year, 1.4 million people die on the roads, so to have people like Michael and Lewis to engage with and educate young people is essential."

When speaking to media, when asked about the two men's achievements and how they compare, the Frenchman said: "I think we are talking about different people. The only thing we can compare is seven against seven," he added.

"Otherwise, you know, on one side you have the very structured organised German team, with an extra talented driver, and on the other side you had one Italian team with a different mentality, a different approach, which became well-structured, well-organised and also a great driver, Michael Schumacher.

"I would say, and I feel, the supremacy, the dominance of Mercedes and Lewis is bigger than the one we had at the time, with Ferrari and Michael," he added.

"Credit to them, the car is very reliable, and apart from the race in Bahrain, which was missed by Lewis, for two years he did not miss to score points in a race, it's absolutely outstanding.

"It means reliability, and the driver is not doing mistakes, it is just a combination again."