"We weren't on our A-game," admits Wolff 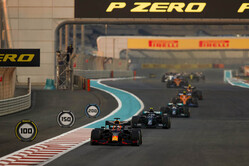 Mercedes boss, Toto Wolff admits that defeat by Red Bull in Abu Dhabi was a "slap on the wrist".

Though there were moments, they were all too brief, and for much of the Abu Dhabi weekend it was Red Bull, and in particular Max Verstappen that had the upper hand.

In FP2, in conditions similar to what were expected for qualifying and the early stages of the race, both Mercedes were over half-a-second ahead of the Dutchman and his teammate.

In FP3 however, Verstappen eclipsed the best time posted by Bottas in FP2 by 0.025s, exactly the time he subsequently beat the Finn by in qualifying.

Come the race, it was effectively over before they'd reached Turn 1, Verstappen leading off the line and Bottas having a worrying little wobble as he exited Turn 1.

Other than the deployment of the Safety Car following Sergio Perez' retirement the Dutchman was never troubled, other than for his own concerns over his tyres, vibrations and oscillations and various other matters one must worry about when one finds oneself beating the mighty Mercedes on a track it has dominated for the previous six years.

At race end Verstappen was 15s clear of Bottas, while fourth-placed Albon was reeling in Hamilton.

"You can see that everybody has weaknesses, and we weren't on our A game this weekend," admitted Toto Wolff in the moments after the race. "That's simply a fact.

"Red Bull won fair and square," he continued. "You can see that Albon also had a very good race, so they have a very good race car, and shows that when their car is in the right place, both drivers do a really good job.

"Probably Albon's pace was quicker than us by the end," he admitted. "They could have been well ahead, and even worse for us.

"We're leaving this race with a slap on the wrist. It wasn't a great weekend for us. It was a car that has never let us down all year, maybe apart from this last weekend."

The Austrian admitted that following the Safety Car, which led to an earlier than anticipated switch to the hards, both his drivers were subsequently forced to manage their tyres.

"Him (Bottas) and Lewis were looking after the tyres a lot, because it was not clear the hard would last until the end, and there was more pace in both of them," he said. "You can see at the end, we saw through sector one, that our car wasn't simply turning around five and six, and the last sector wasn't great.

"We just simply had an understeery car all day today," he admitted. "We had a car that is good on Friday, but not good on Saturday. We tried both directions, weakened the rear, none of that helped. I think somehow we didn't get it right."

However, there was talk that the German, amidst concern over its MGU-K, had turned its engines down. Indeed, when Verstappen suggested as much during the post race press conference it appeared to catch the Mercedes pair off-guard.

"To be honest before I got here I didn't expect to win the race and be on pole," said the Dutchman. "Of course I also read that they had to turn the engines down a bit, so that's not helping for them.

"In general I think still the car performed very strong and better than expected, so of course very happy with that. It's a great way to finish the season, it's a good boost for everyone in the team here and of course at the factory and I just hope of course that we learn from the previous years that we have to be stronger in the beginning of the season to be able to give then a little bit of a harder time."

"What's that about the engine?" asked Hamilton.

"Us?" asked a puzzled world champion.

"Is that right? I don't think that's the case," insisted Hamilton, his teammate chipping in: "Maybe it is, but we don't know."

"Maybe they just don't want to tell you!" grinned the race winner.