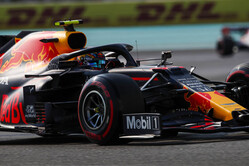 As he waits on Red Bull's decision on whether he will be retained for 2021, Alex Albon insists he has "done everything" he could to keep his seat.

No disrespect to Max Verstappen, following what was a very impressive performance, particularly in qualifying - but the 2020 Abu Dhabi Grand Prix is not a race that will linger in the memory for long.

Indeed, on a day the drivers' various new helmet liveries caused the most excitement, there was little to take away from the season finale.

That said, Alex Albon put in a decent performance, so much so that the 'mob chat' on social media wasn't so much about why he should be dropped, but concern when he began to reel in Lewis Hamilton in the closing stages of the race, after all the pair have history.

As Red Bull ponders whether to give the youngster another year or bring in a driver outside the Austrian team's pool of talent, Sergio Perez being the most likely candidate, Albon feels he has done enough to convince the team to retain him.

"I feel like it's been my best weekend, in terms of performance," said the youngster, adding: "I want to say thanks for a lot of support from the guys at the factory and here. We didn't give up, we kept trying to find solutions and getting me more comfortable with the car, and it is a tricky car to drive.

"But to keep pushing and to have my best result, obviously under all the pressures of the weekend and everything going on, I'm proud of myself, and I felt like it was a good closing end to the year.

"If it's enough or not, it's not mine to say really," he admitted. "But of course, I feel like I've done everything. I'll leave it in the hands of the others to decide."

"Alex has done a very good job today," team boss, Christian Horner subsequently told Sky Sports. "It's probably been his strongest collective weekend of the season, and he's driven a good race. He was putting Lewis under pressure at the end of the race there.

"That now gives us a complete set of information to go away and analyse it," he added, "and work out what we're going to do."

Referring specifically to Albon's performance in the race, he said: "The only way you can put Mercedes under pressure... if for example they split their strategy we could have been very exposed.

"Certainly at the end of the race Alex was able to close on them as he obviously lost a bit of ground at the beginning of the stint after the safety car.

"Alex has driven a good race and he has had a solid weekend," he added.

Asked when a decision might be expected, he laughed and replied: "I'm sure you guys will know as soon as we've made it. It's not going to take too long."