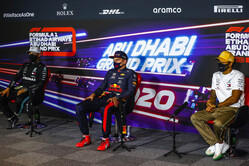 Q: Congratulations Max, a stunning drive, pole position, led every lap, what a perfect way to go into the close season. You really deserved that.
Max Verstappen: Yeah, it was really enjoyable. Yesterday already of course, but today we had a good start and from there on of course you look after the tyres but the car was having really good balance. It was really enjoyable out there today. We did basically everything alright. Once you also start up front you can control the pace a bit more and it makes your life a bit easier.

Q: You had it covered right from the get go. You sounded a little bit nervy for tyres towards the end. You had some vibrations and whether the tyres would go to the end or not?
MV: Yeah, but then also I saw that they were dropping off behind me so I could take it a bit easier. Of course I had to go through a bit of traffic, the backmarkers, but overall it was just a very strong race for the team.

Q: Well, we certainly enjoyed watching you race. We've recovered the two Mercedes drivers after their donuts on the grid. Valtteri, second in the race, ahead of Lewis on that one, but Max certainly had some pace today.
Valtteri Bottas: Yeah, I think Red Bull was too quick today, surprisingly quick today. We thought race pace would be pretty identical but they could really control the race and pull the gap when needed. I was trying everything I could but I couldn't keep up with them.

Q: So you are satisfied with your race, your pace. That was it; that was all you got today?
VB: I feel like it was a solid race from my side. No mistakes and I felt like I couldn't get more out of the package we had today. In that sense a good race today but anyways ahead of my team-mate. It's been a while since I've been on the podium, so it's going to be nice, even though it's not going to be champagne there.

Q: Well done. It's a very short off-season. What happens now for you through the winter?
VB: We still have some commitments next week but for sure some time off over Christmas. Hopefully can see the family. It's been a while. I can't remember the last time I saw them. Quick reset, quick training block and start again from zero and try to do a bit better.

Q: Any message for the team?
VB: I think the team has been, like I said on the radio, amazing this year. I'm really proud that we get P1 and P2 in the Drivers' Championship. Amazing season by every single team personnel in all the factories so very thankful.

Q: Lewis, your 165th podium in Formula 1. Seven in a row here but perhaps not the step you wanted today on the podium?
Lewis Hamilton: Oh you can't win them all! Considering the past couple of weeks I've had I'm really generally happy with the weekend. It's obviously not 100% and not perhaps as good as we would like. But congratulations to Max. That was a really hard race for me, physically. All year, physically I have been fine but today I definitely wasn't. So, I'm just glad it's over. Big, big thank you to the tea, for their continued support. It's still a fantastic result to get two podium finishes for us.

Q: Recovering from COVID-19, you feel that's impacted on your drive today without doubt?
LH: Physically? Massively. I don't think I've ever been so blown. My body is not feeling great. But look on the bright side: I made it through and you know, I didn't think anytime last week I would be here so I am truly grateful for my health and to be alive and yeah, looking forward to recovering over the next period of time we have and getting back into training and get my body back to where I know it should be.

Q: And finally, Alex Albon closing you down towards the end?
LH: Yeah, the Red Bulls I think this weekend were just too far out of reach for us. We just couldn't hold on to the pace they had. Fantastic to see Alex right up there with us and we were having a two-team battle, which is what the sport needs. I really hope and pray in 2022 the cars are better to follow, cos I don't know, it feels a boring race to watch. As soon as you get within three seconds of someone you are just sliding around and you're in turbulence the whole time. I really hope that what Ross [Brawn] has proposed really makes a difference. We just need good tyres.

Q: Max well done, great race by you to take the 10th win of your career and what a great way to round out the season?
MV: Yeah, it was an enjoyable race. We had a decent start I think and from there onwards I could manage the gap and could look after my tyres. And then of course the safety car came out at a little bit of an unfortunate time because we then had to do a very long stint on the hard. Luckily the tyre coped with it but you still have to manage it a bit more. The car was really good today. Just a good balance and then you can also look after your tyres and I could then build a gap all the way through the race.

Q: It was a dominant performance from you. Any anxious moments for you?
MV: Just a little bit of vibration on the tyre, so I was think back a little bit to Spa but also of course Imola. I was keeping an eye on it on every straight. But yeah, luckily all good. The pace was still there. The tyres were still performing.

Q: The gap to Mercedes, not just today but all weekend really, have you been surprised by it?
MV: To be honest before I got here I didn't expect to win the race and be on pole, so maybe a little bit. Of course I also read that they had to turn the engines down a bit, so that's not helping for them. In general I think still the car performed very strong and better than expected, so of course very happy with that. It's a great way to finish the season, it's a good boost for everyone in the team here and of course at the factory and I just hope of course that we learn from the previous years that we have to be stronger in the beginning of the season to be able to give then a little bit of a harder time.

LH: What's that about the engine?

MV: Yeah that's what they said?

LH: Is that right? I don't think that's the case.

MV: Maybe they just don't want to tell you!

Q: Valtteri, well done. Ultimately, a pretty lonely race for you this evening. Tell us about your run to the 11th podium of the season.
VB: For sure, tried everything I could and I noticed pretty early on in the first stint that Max and Red Bull had more pace. The first stint was quite understeer-y for me. It was a short stint but I felt that was a bit of a limitation but then we made a bit of an adjustment on the front flap for the second stint and that felt actually, balance-wise, not bad, just not quick enough. So, for sure, it was surprising. We thought that the race pace would be pretty much identical to the Red Bull but it wasn't the case today. So yeah, obviously I've had much worse races this year, so it's actually, in this kind of season, one of the good ones for me. At least it was nice and clean. Start was good and everything - so could have been a worse way to end the season. And actually, if we think about the big pictures, now in this team, being beaten by Red Bull at the last race of the season, for sure it motivates us even more to work hard over the winter for next year to make sure this doesn't happen again.