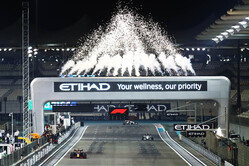 The last race of the season always has a certain 'end-of-term- feel about it, but this year more than ever.

Perhaps it's the whole COVID thing, all of us glad to see the back of 2020 and for once actually joyfully anticipating singing that awful Robert Burns ditty in a couple of weeks.

While we are now almost in mid-December and almost at the time when the birth of the special infant is celebrated (it's Tuesday 15th in case you were wondering - Ed), this isn't the latest end to an F1 season, for in 1963 the last race was December 28 and the previous year the 29th marked the last event.

This year we say farewell to a number of drivers and even a number of teams, while there are also some driver movements.

While the fate of Alex Albon and Sergio Perez is yet to be decided, we look to be saying adieu to Daniil Kvyat, Kevin Magnussen and Pietro Fittipaldi, while Renault becomes Alpine and Racing Point morphs yet again, this time into Aston Martin.

Of course, the second seat at AlphaTauri has yet to be confirmed, likewise that at Red Bull.

Perez' credentials are already well established, and therefore it is up to Albon to deliver today and thereby save his seat. Christian Horner and Helmut Marko have shown uncharacteristic patience thus far, and while there is no doubting the youngster's ability he really must move up a gear (or two) and give Verstappen more support.

Riding shotgun for the Dutchman today would be the perfect opportunity for the cat-loving Thai to prove that he wants the seat and will fight for it. If not, a proven race-winner is waiting in the wings.

Following that superb pole-winning lap, Max has the opportunity this evening to convert it into his second win of the season. Starting in clear air, he only has to hold off the Mercedes pair into - and out of - the first corner to stand a good chance of denying them.

In all honesty, Bottas appears Mercedes best bet today, for while the Finn is clearly fired-up following last week's shot across the bow from Russell, Hamilton does not appear to be firing on all cylinders. There is talk that the Briton returned too early after catching the virus, but in all honesty it wasn't only across Bottas' bow that Mr Russell fired that warning shot.

As ever, the midfield will be frantic, and having looked so strong at the start of the weekend, Renault failed when it most mattered. That said, both drivers have free choice in terms of tyres this evening, which must be considered a bonus.

While Racing Point appears to have third almost in the bag, one must never write-off McLaren, and judging by yesterday's qualifying performance - not to mention the overnight news regarding a sizeable investment - the Woking outfit is up for the fight.

Racing Point's cause is not helped by Perez having to start from the back of the grid, but that didn't hinder the Mexican too much last weekend. Indeed, today offers Checo one final opportunity to impress Messrs Marko and Horner.

AlhpaTauri should add some more points to its tally, though it is unlikely to overhaul Ferrari.

Talking of the Maranello outfit, while Leclerc will be keen to make up for last weekend's silliness, teammate Vettel will be glad to get the race over and done and put 2020 and Ferrari behind him.

The optimal race strategy is a (groan) one-stopper, starting on the mediums for 18 laps and moving onto hards for 37 laps (or vice-versa). It's also possible to do a one-stopper starting on the softs for 14 laps and then going onto the hards for 41 laps, but this is slightly slower in terms of overall race time.

A two-stopper is slower, especially because track position is crucial, with the track being hard to overtake on and a complicated pit lane exit that adds to the time loss. The way to do it would be two soft stints of 12 laps each (one at the start and the other one as last), plus one 31-lap hard stint.

Of the leading ten, Verstappen, Bottas, Hamilton, Sainz and Leclerc start on the mediums, the others on softs.

The pitlane opens and the drivers begin heading out, some taking their place on the grid unusually early.

Christian Horner makes it clear that Albon's job today is to cover the Mercedes pair.

Following the national anthem, Lewis Hamilton presents F1 CEO, Chase Carey, who is handing over to Stefano Domenicali, a crash helmet signed by all the drivers.

Russell reports his pedal feels really long. Told that it's fine, he replies: "I'll take your word for it."

Outside the leading ten, all start on mediums bar Ricciardo, Vettel, Perez and Magnussen who all start on hards.

Ricciardo is told to really work his hard tyres over the course of his warm-up lap.

"55 laps, everything we've got," Ricciardo tells his team as he prepares to sign off.

All get away cleanly for the warm-up lap.

They're away. Good starts from Verstappen, Bottas and Norris. Into Turn 1, Sainz attempts to get through on the inside of Albon while up ahead the rear of Bottas' Mercedes wobbles as he heads out of the corner. A poor getaway sees Ocon lose out to Stroll who is now side-by-side with Gasly.

Following a poor start, Leclerc is under early pressure from Raikkonen having already lost out to Vettel, while at the back there's a massive lock-up for Fittipaldi.

At the end of lap 1, it's: Verstappen, Bottas, Hamilton, Norris, Albon, Sainz, Kvyat, Stroll, Ocon and Gasly. Perez has dropped to last, while Magnussen has made up four places.

Gasly makes a bold move on Ocon to take ninth. The Renault driver appears to fight back but the AlphaTauri has it covered.

Bottas is told to look after his fronts for a couple of laps.

In quick succession, Perez nails Latifi and Fittipaldi to take 18th. His next target is Magnussen.

"The car is all over the place," complains Latifi.