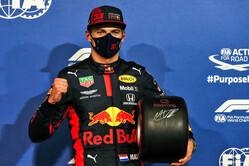 Red Bull driver Max Verstappen claimed pole position for the season-closing Abu Dhabi Grand Prix, using the P Zero Red soft in C5 compound (the softest of the range) to go fastest of all in qualifying for the first time since Brazil 2019. Less than a tenth of a second separated the top three, while Verstappen was also fastest in FP3.

Mercedes, Ferrari, Red Bull, Renault and the McLaren of Carlos Sainz headed out on the medium tyre in Q2, with both Mercedes, plus Verstappen, Sainz and Leclerc setting their best Q2 times on that compound. They will all therefore start the race on the yellow tyre tomorrow, but Leclerc has a grid penalty that drops him out of the top 10 on the grid.

The optimal race strategy for the 55-lap Abu Dhabi Grand Prix is a one-stopper, starting on the P Zero Yellow medium for 18 laps and moving onto P Zero White hard for 37 laps (or vice-versa). It's also possible to do a one-stopper starting on the P Zero Red soft for 14 laps and then going onto the hard for 41 laps, but this is slightly slower in terms of overall race time.

A two-stopper is slower, especially because track position is crucial at Yas Marina, with the track being hard to overtake on and a complicated pit lane exit that adds to the time loss. The way to do it would be two soft stints of 12 laps each (one at the start and the other one as last), plus one 31-lap hard stint.

Mario Isola: "Qualifying is always a very important part of the Abu Dhabi Grand Prix, with more than half the races held here having been won from pole. The medium yellow tyre is a very interesting compound to start the race on, with five of the top 10 qualifiers in Q2 setting their best times with this compound and four more trying to. We have noticed less improvement in terms of lap times in comparison to last year, perhaps also because of the absence of Formula 2 and Formula 3 support races, which means less rubber left on the track. But with the top three all starting on the medium and some very fast cars on the soft right behind them, we're set for a tactically intriguing race: especially at the start."