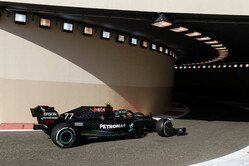 Being more representative of the conditions we can expect for qualifying and the race, the next ninety minutes should give us a better idea of the pecking order. That said, it already appears to be a case of 'business as usual' as far as the Black Arrows and Max Verstappen are concerned.

Having handed their cars over to Mick Schumacher and Robert Kubica respectively, Kevin Magnussen and Antonio Giovinazzi are back in action this afternoon.

While this morning we saw the teams testing components for 2021, this afternoon they will be testing next year's tyres.

Each team will have one set of the 2021 C4 compound per car to try out for a minimum of eight timed laps (as opposed to Bahrain, where there were two sets per car of the 2021 C3 compound).

The aim of the test is to allow teams and drivers to gather data that will be useful for next season. The new specification for 2021 has been developed to suit the continued evolution of the current cars and the expected loads on them next year.

Pirelli has left the teams free to define their own run plans in order to collect the information that will be most useful to them, but suggests using reduced pressures: 21.5 psi at the front and 19.5 psi at the back (1.5 psi and 0.5 psi lower respectively than the 2020 specification). The Italian manufacturer has also suggested modifying the car set-up to allow the new structure to work at its best and compensate for any effects such as understeer.

The lights go green and in no time at all there are 11 drivers on track, all sporting the prototype tyres.

Gasly reports that the Williams photographer is taking a lot of pictures of his car. He is told not to worry as the team will have a new car by then.

Raikkonen goes third with a 38.943 as Bottas looks set to improve again.

It looks like everyone wants to get those 8 laps out of the way and return to the 2020 rubber.

Hamilton is told to pit in order to change steering wheels, while Bottas reports an issue with his gas pedal.

As Perez goes fifth (39.130), teammate Stroll expresses his frustration with another (unidentified) driver. "I don't know what he's doing," cries the exasperated Canadian.

Leclerc has successive lap times deleted for exceeding the limits at Turn 21.

Like Stroll, Ocon is unhappy with one of his colleagues, complaining that somebody or other is "moving under braking".

Hamilton is the first driver to switch to the 2020 rubber, the world champion bolting on a set of mediums.

As his colleagues pit for the 2020 tyres Hamilton has the track to himself. His first flying lap sees the Briton go top with a 36.479, 1.339s quicker than anything seen previously.

Bottas, Gasly, Raikkonen, Perez and the Ferraris head out on hards and mediums, as the session proper finally gets underway.

Perez goes third with a 37.506, the Mexican set to start from the back of the grid on Sunday for exceeding his engine components allocation.

"I don't know what happened," says Fittipaldi, "Something locked up, I just braked and it completely locked-up". An experience Romain Grosjean could write a book about.

As the circuit is bathed in artificial light, Ricciardo goes fifth with a 38.075.

Verstappen heads out on the mediums, the Dutchman going third with a 36.057, 0.781s off Bottas' best. Quickest of all in the first sector, he appeared to make a mistake in S2.

Albon posts 37.568 but once again has his time deleted.

While most are on either the mediums or hards, the Williams pair are now on softs.

Hamilton heads out on a brand new set of softs. The Briton subsequently posts a 36.097... only to have it deleted.

Bottas aborts his flyer after a mistake early in the lap.

Albon finally completes a fully legal lap and goes fourth with a 37.263. Though he's just 0.2s off his teammate's pace, Verstappen has yet to try the softs unlike the cat-loving Thai driver.

Finally on the softs, Verstappen goes quickest in S1. Posting a PB in S2 he finally aborts the lap after losing time behind a slow Perez.

As Kvyat goes tenth (37.596), Leclerc reports that his tyres have cooled down "quite a bit".

"I'm behind Alex now, ****," complains Verstappen. Told he will pass him the Dutchman, who insists his tyres are gone, says he wants to pit but is told (firmly) to stay out.

At which point the Mercedes pair head out on the prototype tyres again.

"Incredibly off-putting these shifts," reports Russell, who must have noticed a slight change in terms of the car he was driving seven days ago.

Flames leap from the rear of Raikkonen's Alfa, the Finn wisely parking up immediately and jumping clear. The session is red-flagged as a clearly frustrated Finn grabs the extinguisher from a marshals and sets about saving the burning Alfa.

"You have a big fire," Raikkonen is warned, "get the hell out of there, and quick!"

The Iceman lives up to his nickname (again) as he rips off the rear bodywork to check out the engine.

Even though it is now loaded on the back of a low-loader, smoke continues to pour from the Alfa.

The session resumes with 6 minutes remaining, the 'interruption' having come at the worst possible time. Furthermore, the track surface has been left "slippery in sector 6", according to Race Control.

More drama as Hamilton grinds to a halt in the pitlane. "I can't get any gears, I've got no gears," he reports as he stops right outside Fittipaldi's garage. Running to his rescue, his crew soon get him going.

All are on track bar Russell, Raikkonen and Fittipaldi.

Albon complains after Ocon appears to move under braking. A totally unnecessary move from the Renault driver.

Hamilton pits for another 'hot swap' of steering wheels.