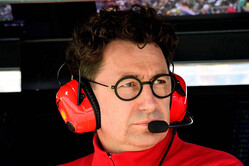 The Italian had previously missed a couple of races this season as part of a new policy at the Italian team. Back at the helm in Sakhir however, Binotto presided over one of the team's worst performances of the season.

While remaining in Bahrain following last week's race, Binotto complained of feeling unwell and has now returned to Italy, though the team was keen to make clear that his illness is not COVID-related.

The team heads into the final round of the season sixth in the standings, over 40 points adrift of 5th-placed Renault, and only 28 points ahead of AlphaTauri.