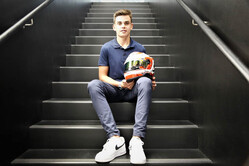 James Anthony Wharton has won the first Scouting World Finals run by the Ferrari Driver Academy (FDA). He headed to Maranello from Australia and was the outstanding driver at the evaluation camp held at the team's headquarters in October.

Taking part were six youngsters from around the world, selected by the organisations working alongside Ferrari in monitoring talented young drivers: AciSport for Europe, Escuderia Telmex for Latin America, Tony Kart for the world of karting and Motorsport Australia for the Asia-Pacific region, the latter being the ones who picked Wharton.

Wharton was born on 8 July 2006 in Bundoora, Victoria, and has motorsport in the blood, given that his father used to kart too. He was two and a half years old when he first tried a kart and still remembers the experience, saying “it was one of the best days of my life".

He reckons he possesses steely determination and makes it a point of honour to keep his promises and be true to his word and be a team player. He reckons his driving style is methodical, built on study and preparation, not instinct. His favourite number is 13 and his favourite driver is fellow countryman Daniel Ricciardo.

Wharton, back home in Australia to spend some time with his family, was told he had won the Scouting World Finals by video call, with Marco Matassa, Head of the FDA in Maranello and Scuderia Ferrari Sporting Director Laurent Mekies in Bahrain.

The FDA will now offer James a training programme with a view to his racing in Formula 4. However, he will have time to prepare as 15 is the minimum age at which one can compete in the category.

"James impressed us in many ways," said Marco Matassa Head of Ferrari Driver Academy. "He has considerable natural speed and he combines this with the ability to listen and put into practice the advice he is given. We saw that at Fiorano from the way he drove in both dry and wet conditions.

"His level headed and positive attitude, his ability as a team player and his cheerful nature make him particularly suitable for motor sport, which requires a driver to perform on track but also to be able to communicate with the team so as to help them with their work. Being able to express the feeling from the car into words is no easy matter and James proved adept at it. He is also well educated, respectful and humble; values which fit well with those of the FDA.

"Wharton's selection also shows that the FDA's scouting system, which it expanded this year, works well and I'd like to thank Motorsport Australia for identifying James' talent for us."

"I am very happy to be selected as the best candidate in the camp," said Wharton, "because it's a reward for all the effort me and my family have always put into my dream of becoming a professional racing driver.

"The FDA programme looks very interesting and I am sure it is the ideal path for me to progress."