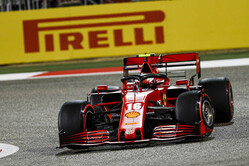 Charles Leclerc produced an almost perfect lap in the shoot-out for the top ten grid places, to set the fourth fastest time to start on the second row of the grid, equalling his best performance from three other races, Great Britain, Eifel and Portugal. Sebastian Vettel was unable to make the cut out of Q2 and will start from 13th on the grid, when the race on the Bahrain International Circuit's Outer Track starts tomorrow at 20.10 local, (18.10 CET).

The power unit on Seb's SF1000 was changed as a precaution after the afternoon free practice, the replacement being the one originally used yesterday in free practice, and he and Charles both made it to Q2 without too much difficulty, even if traffic and the track improving meant they both had to use two sets of Soft tyres. In Q2 both Ferraris took to the track on the Medium tyre to try and set their best time on it, but it was soon clear that this was not possible. Charles did another run on the same compound after which they both went out for another run on the Softs. Leclerc made the cut in 53.825 but Vettel was out in 54.175, which was 13th fastest. At least this gives the German a free choice of tyre for the start.

Q3. In the final part, Charles did just one run on the only set of new Softs he had left. Concerned about traffic and given the track was not getting much faster, he went out immediately and posted an excellent 53.613 which at the time was just two hundredths slower than the fastest lap at that point, set by Max Verstappen. Leclerc called it a day and watched the rest of the proceedings from the pit wall alongside the engineers. Even though the others had another set of tyres, only Valtteri Bottas and George Russell in the Mercedes were able to improve, thus pushing Charles back from third to fourth.

Charles Leclerc: "I am so happy with fourth place. We took a chance by going out at the beginning of the session in Q3. We could have waited, but because of the risk of traffic and because I had a clear idea of what to do, I chose to go out immediately and I managed to put together a good lap. After that, I got out of the car because I had no more new tyres and I knew that realistically I could not beat the time I'd just set.

"Going into the race, I have to say it's a bit of a step into the unknown, having lost most of FP2's track time which means I haven't done a race simulation. All the same, I think I got good pace today and I hope that will be the case in the race also. I don't think we have the third fastest car here, but I plan to make the most of my start position in this race."

Sebastian Vettel: "I generally had a good feeling driving the car today so I don't really know what went wrong. Maybe on the straights I was losing a bit as well as in the middle sector. I was confident after Q1 but then we didn't make it. I don't know if this could be related to the power unit change. For sure my mechanics did everything well as the car was fine to drive.

"Taking care of the tyres will be difficult tomorrow but it could be the key to a good race. We will have a free choice of tyre for the start and we will see what we can do."

Mattia Binotto, Team Principal: "Charles produced a brilliant lap to equal his best qualifying performances of the season. Fourth place was down to his amazing talent, all the more extraordinary considering he missed almost all of the second free practice session. It's just a bit of shame that he couldn't make the cut out of Q2 on the Mediums, as this would have put him in a better position for the race, but he tried his very best. Sebastian missed some track time at the end of FP3 with a technical problem and he felt much more comfortable with the car than yesterday, but he couldn't make the cut out of Q2 in a session where just hundredths of a second could see you gain or lose places. The team at the track should be congratulated on doing a great job in changing Seb's PU very quickly as a precautionary move after FP3 and also for the way they prepared for and executed what was a very complex qualifying session. As usual, in the race, we will try and bring home as many points as possible. It won't be easy as everyone is very evenly matched but if we do everything perfectly we could do something worthwhile."