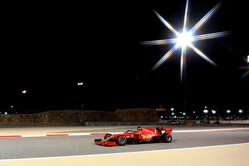 Scuderia Ferrari had a more difficult time of it than expected during Friday free practice for the Sakhir Grand Prix on the Outer Track of the Bahrain International Circuit. In the first session of the penultimate race of the year, Sebastian Vettel and Charles Leclerc were eighth and tenth respectively. But in the second one, the Monegasque hardly ran, as a driveshaft failed, while the German worked in race configuration doing long runs, but his attempts at the all important qualifying simulation did not go well as he was unable to set a time on the Softs.

The expectation was for the lowest lap times in the history of Formula 1 and that was exactly the case. As usual, the track improved rapidly as the cars gradually put more rubber down. The new middle sector of this 3.543 km track, almost two kilometres shorter than the usual version, proved to be quick but also rather bumpy which made life more difficult than expected for the drivers. Added to that was the traffic and the need to respect track limits, which saw many drivers having to abort quick laps or have their time cancelled. For this first 90 minutes, both Ferrari men used just the Soft tyre. The German did 40 laps, the best in 55.281, while the Monegasque did 35, the quickest being a 55.449.

As mentioned, the second session didn't really happen for Charles. He completed his out lap and then as he set off for a timed run, a halfshaft problem in the second sector meant he had to come back to the garage and he never went out again. Sebastian struggled as he tried to find the limit of his SF1000, spinning twice while on his quali simulation run. The German then moved on to the usual long run on the Medium tyres, completing a total of 43 laps and his best time of the evening was a 55.839 set on that compound.

Sebastian Vettel: "We have had a mixed day: the first session was ok, the second was horrible. We tried some setting changes on the car, but the result was a very aggressive car, which is not what we needed. I hope tomorrow we can close the gap and get back on the right track.

"This track configuration is maybe a bit too short, almost over before it begins, but it's ok. Turn 4 is more or less as it was last week, a bit faster because it opens up, then it is bumpy between turn 7 and 8 where the kerbs are very aggressive. This part is quite tricky but it's not bad.

"With 20 cars on track, Q1 will be very tight especially because of the traffic: we have to go very slowly on the cool-down laps to bring the tyre temperatures down and this complicates things. I hope all the drivers will manage to get a clean lap without being impeded, or having too much trouble with traffic. It will be very tight and a few hundredths will make the difference."

Charles Leclerc: "It was better than expected today. Things were going well until the technical problem at the very beginning of FP2, so hopefully it will be a good day tomorrow. I enjoyed the track with very few corners as it reminds me of the karting days. It's a nice track and it should be a fun race. With these long straights, whoever is behind will have a big advantage.

"Finding a gap tomorrow in qualifying will be my main concern. Especially in Q1 and Q2, which could be messy, I think. The car felt good at the beginning of FP2 so I feel confident we are in a good place, but we still need to see the lap times to confirm this."