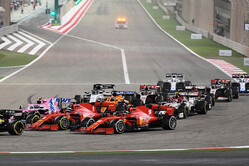 The most important news to emerge from today's 16th Bahrain Grand Prix at the Sakhir circuit is that Romain Grosjean escaped with only minor injuries from a terrible accident in which his Haas went through a barrier and caught fire. The halo, the car's survival cell, the speedy reaction from the marshals and the immediate intervention of the Medical Car crew all played their part as did the driver's ability to emerge from the car unaided. The incident confirmed yet again the very high safety levels of current Formula 1 cars, which is mainly down to the efforts of the FIA.

It was a disappointing race for Scuderia Ferrari, which brought home just a single point thanks to a tenth place finish for Charles Leclerc. Sebastian Vettel was 13th, having been forced to spend most of the race towards the back of the field.

The race was stopped for over an hour while the barriers were replaced. At the restart, Charles got away well to move up to seventh. He then lost a few places and found himself fighting around tenth place, which is where he eventually finished, having struggled to find a good pace especially in the early stages. Sebastian ended up towards the back of the pack, due to the fact he had to avoid Lance Stroll's overturned car on the opening lap and spent his race in the lower half of the field, unable to move up into the points.

Charles Leclerc: "After Romain's crash, I was feeling very bad. It was probably the first time I have felt like this during a race, because I was trying to keep someone behind me and so I saw what happened in my rear view mirrors and when I got to turn 9 I saw the flames, so I was worrying and waiting for news about Romain. I was extremely happy when they told me he was ok, after what seemed like a very long time. Well done to everyone who works on making our cars safe. It's impressive to see what an incredible job they've done! Once I knew Romain was ok I focused on the race again.

"It was a difficult one for us today, as we were really not quick enough. I had a very good start but unfortunately after that it was all uphill. P10 was the best we could achieve today. We have two more GPs ahead of us now and we'll try to get the most out of them."

Sebastian Vettel: "Maybe the only good news of today is the one I received on the radio, confirming to me that Romain was ok. When we stopped in the pitlane and I jumped out of the car I saw the images and it was incredible how he was able to get out of his car. I have to admit I tried not to look at the images too much.

"Talking about my race, the first stint was very bad, I didn't have the pace and I lost quite a lot of ground. The situation improved as the race went on and in free air in the end it was not that bad but all in all it was definitely a difficult race."

Mattia Binotto, Team Principal: "The outcome of today's race is secondary to the relief we felt when Romain Grosjean got out of his car after that terrifying accident. The fact that he suffered only minor injuries is a testament to the amazing job done by the FIA in terms of safety and the courage and professionalism of all those involved on that front at a Grand Prix. But for the progress made in recent years and above all the introduction of the halo, we might have been commenting on a tragedy.

"As for our race, it was disappointing, but we had seen right from Friday that we would struggle this weekend. Now we have a few days in which to analyse all the data carefully and see how we can improve the car's handling for next weekend. As we stay in Sakhir, the track conditions and temperatures should be the same, but we will be racing on a different layout for the very first time, which could present us with an opportunity. It will be up to us to grasp it and to do better than we did today."