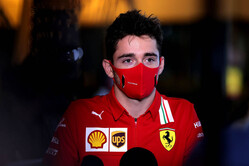 With three races remaining, the battle between Racing Point, McLaren, Renault and Ferrari for third in the team standings is covered by just 24 points.

However, while Ferrari has out-scored its three rivals in the last three races, its cause was aided by the unusual conditions in Turkey.

Though next week's race on Bahrain's outer track could be another curve ball, this weekend's race and that in Abu Dhabi are likely to be fairly 'normal', and as a result Ferrari is unlikely to benefit from the same sort of lottery-like conditions it benefited from two weeks ago.

"That's definitely the target," he said when asked if Ferrari has its eyes on 'best of the rest', "but realistically it's going to be very, very difficult.

"We need to have three perfect weekends," he admitted, "so we need to focus on ourselves and see whether we can make it or not.

"I believe it will obviously depend on how good the work we do is and how consistent they will be in the next three weekends," he added, referring to his team's three rivals.

The youngster has mixed memories of the Bahrain International Circuit, for having taken pole here last year, he was set to claim his maiden win until suffering a power unit issue.

It was a painful one obviously," he said. "I had my first pole so that's a very good memory and then unfortunately in the race we had a technical problem that stopped us from winning.

"We were very competitive and in the past also Ferrari has always been competitive here so hopefully we can have a good weekend starting from tomorrow."