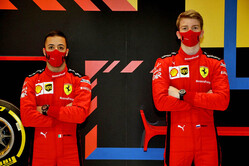 Robert Shwartzman and Antonio Fuoco will take part in the Abu Dhabi young driver test for Ferrari on 15 December.

This morning, the Russian and Italian were at the factory for a seat fitting in the SF1000, which they will drive two days after the final race of the season.

This will be Shwartzman's first appearance at an official F1 test, following on from his debut in a at Fiorano as part of the #RoadToF1 programme run by the Ferrari Driver Academy (FDA).

Having won the F3 championship in 2019, Shwartzman has had a brilliant debut season in Formula 2 this year, taking his maiden win after just three races, in the feature race of the second round at Spielberg. The Russian followed that up with wins in Hungary and the Spa-Francorchamps sprint race.

Fuoco is a specialist in the Ferrari simulator as well as working to support the young FDA drivers. The Abu Dhabi test will be his fourth with the team, having already driven in 2015 at Spielberg as well as in 2016 and 2019 at the Barcelona-Catalunya circuit.

To date, the Italian has completed 309 laps, or around 1,415 kilometres, at the wheel of a Ferrari. The outing in Abu Dhabi will be an excellent opportunity to reacquaint himself with an F1 car at a time when on-track testing is extremely limited.

Callum Ilott will also be taking part in the Abu Dhabi test, the English youngster, currently lying second in the F2 championship, with three wins, four pole positions and two additional podium placings, will be at the wheel of one of the two Alfa Romeo C39s.

This will be a second F1 outing for the 22 year old from Cambridge, after he completed 41 laps of the Barcelona-Catalunya Circuit last year.

"It's exciting to know that I will be driving the SF1000 in Abu Dhabi immediately after the end of the Formula 1 season," said Robert Shwartzman. "I was able to try the SF71H at Fiorano at the end of September and it was incredible, even though that car is almost three years old now.

"I can't wait to jump into the 2020 car and get out on track alongside so many of the drivers I've been racing against in Formula 2. I plan to enjoy every single minute of this great experience."

"I'm very happy to get back behind the wheel of a real car," added Fuoco, "having done so many virtual laps in the SF1000 in the simulator. It's very useful for someone in my position, to be able from time to time to get into a car and check the correlation between the tools I usually use and how the car actually behaves on track.

"On top of that, it's an honour to put on the red race suit and drive a Ferrari on track, a feeling that is always hard to put into words."