Binotto will not attend Turkish GP 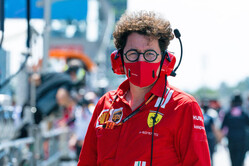 Speaking at Imola last month, as the Italian team seeks to hold on to sixth in the team standings ahead of a much-needed step forward next season, Binotto told reporters that he intended to miss some - if not all - of this season's remaining races.

"You need always to balance your tasks at the racetrack and at the factory," he told reporters. "The factory is important where we are developing the car, preparing the cars.

"I think I will not follow all the races," he continued, "even in 2020 I am already considering eventually skipping some of the racing in the last part of the season starting from Turkey. Because at the end, when you're responsible for an entire team, certainly the race event is important, but the entire management of the entire team is even more important."

Ahead of this weekend's race in Istanbul, the team's sporting director, Laurent Mekies confirmed that Binotto will not be present.

"Mattia has always approached his role in an innovative way, trying to think outside the box," he said. "He has come up with a method of working that gives the flexibility to manage the priorities in the most efficient way possible: he had already adopted this approach when he was technical director and has applied it even more so now as team principal.

"At first it might seem strange not to see him physically in the briefings or on the pit wall," he admitted, "but he will make use of all the current communication technologies so that his voice and input will be loud and clear to everyone, both inside and outside the team!"

Looking ahead to the weekend, the Frenchman admitted: "Looking at the track characteristics, it won't be an easy weekend for us.

"Nevertheless, the pecking order behind the top three drivers is always very close as it has been all season and the slightest thing can make the difference between fighting for a place on the second row or not making it to Q2.

"Our main aim is to confirm the small progress we have seen in recent races and if possible, reduce the gap to those ahead of us in the Constructors' championship.

"We are fortunate to have Sebastian who has already raced here four times," he added, "while Charles will be tackling it for the first time, having been able to try it out on the simulator".