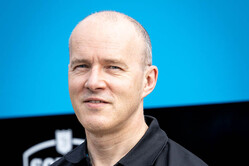 Williams acting team principal, Simon Roberts has tested positive for the coronavirus and will therefore not attend this weekend's Turkish Grand Prix.

Just days after Williams revealed that it had recorded a number of positive tests for the coronavirus and was therefore making changes to its trackside team, it has been confirmed that acting team principal, Simon Roberts has also tested positive for the virus.

"The FIA and Formula 1 can confirm that Williams Racing acting team principal, Simon Roberts has tested positive for COVID-19 prior to travelling to Istanbul for this weekend's Turkish Grand Prix," said the FIA in a statement tonight.

"Simon returned a negative test on Monday during the team's regular COVID testing schedule, however after displaying minor symptoms he underwent a further test this morning (Thursday) which returned a positive result and is now isolating for the required 10-day period as per UK national guidelines.

"Simon has not been in close contact with any other members of the Williams Racing team, and the team will continue to operate trackside as planned."

"Several members of our trackside team are isolating as a result of being identified as close contacts of the positive cases," admitted Williams last Friday as F1 revealed another 8 positive cases.

"As per our internal COVID-19 protocols, a number of factory-based team members will therefore fulfil these roles for the upcoming Turkish Grand Prix weekend.

"We ask for understanding that we will not be adding any additional information on this subject, but we would like to extend our thanks to all our traveling and factory based team members and their families, for their continued work and support during what is an extremely challenging time."

In the wake of today's announcement Williams confirmed that Dave Redding, Team Manager, and Chief Engineer of Vehicle Design, Adam Carter, will assume Roberts' responsibilities on the ground in Turkey.