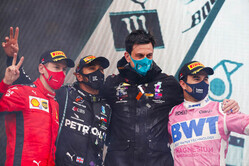 Sebastian, welcome back to the podium. What a race.
Sebastian Vettel: Yeah, it was quite intense, quite long, but good fun. I had a really good opening lap and I think I found myself already in P4 I was quite happy on the extremes. Then we switched to inters. It was a bit more difficult in the beginning and only towards the end I started to find the pace again. Obviously it was very intense in the last lap and yeah, a bit of a surprise to snatch the podium in the end but certainly very happy. It was a really enjoyable race in very tricky conditions.

You were quick all the way through but just take us through those last few corners where you were able to snatch that podium?
SV: Well, I saw that Charles was quite close to Sergio and I heard that Sergio was struggling with his tyre, so the laps before I was already chasing them down and then I could see them fight and as soon as I saw Charles locking up I saw that there was an opportunity for me. It was very close too with Sergio; he had nothing left on his tyres.

Were there any thoughts in the closing stages, "I'm going in for in for dry tyres, give it a gamble?"
SV: Yes, all the time. Twenty laps to go I was thinking about dry tyres, because the circuit was constant, the tyres anyway were worn and ultimately we had slicks. I think it was just a matter of nobody dared to put them on. There was some rain forecast at the end that didn't come, so I would have really like to have put them on as I think that would have been a chance to win but equally happy with third.

A day for wise heads and talking about a wise head and a lot of experience, Sergio Pérez, what a brilliant drive? You held onto those tyres from lap 10!
Sergio Perez: Yeah, that was key really. I told my team on the radio, "I think one more lap on those tyres, I think they would have exploded". The vibrations were extremely bad towards the end. But I think it also made our race, looking after them in the beginning, towards the end when we had drying conditions. I think the team did a fantastic job in terms of strategy and I think Lewis today was extremely strong and towards the end we died but we managed to get a good result.

Did you have any big moments, shocks or scares during the race?
SP: Yeah, a little one; one with Max. I couldn't see anything in my mirrors. My mirrors were full of fog. My engineer was telling me the gaps and so on. All of a sudden I saw Max running wide and he disappeared and yeah, the other one was with Charles. I wasn't aware that he was so close to me. So in the final lap it was a pretty good battle with him. He overtook me into Turn 9 and then I overtook him back into 11. It was a chaotic race but a strong result for us.

It's a fantastic leaving present for the team. A few more races to go of course but this is such an advert for you, for your skills, your speed, for the future. You don't have a seat on the grid next year yet.
SP: Yeah, well, I think as always you have to be delivering weekend after weekend and you are only as good as your last race, so it's important to finish on a high. The rest is not in my hands.

Lewis, the mark of a great sport sporting champion is to win on the days when you are maybe not the fastest or the strongest or don't have the best equipment. You've come through the pack today to become a seven-time world champion with a true champion's drive.
Lewis Hamilton: Thank you, I'm a bit lost for words. Naturally, I have to start with saying such a huge thank you to all the guys here and all the guys back at the factory, both our factories, and all our partners for enabling us and giving us this opportunity. I wouldn't be able to do this if I didn't join this team and the journey we have been on has been monumental. I'm so proud of them. I want to also say a big thank you to team LH for sticking with me all these years and uh… then to my family you know. We dreamed of this when were young, when I was young, when we were watching the grands prix and this is way, way beyond our dreams. It's so important for kids out there to hopefully see this and know that… don't listen to anybody that tells you you can't achieve something. Dream the impossible and speak it into existence. You've got to work for it. You've got to chase it and you've got to never give up and never doubt yourself.

You have equalled the great Michael Schumacher with seven world titles. That was a drive Michael Schumacher or any of the truly great drives in our 70-year history would have been proud of?
LH: Thank you. We knew coming here it was already such a difficult weekend. We weren't massively disappointed with our qualifying position. We knew that we were kind of on the back foot and we did the best we could. But then we learned a lot. This is what we do as a team. There is no blame game. We hash it out. We do hash it out. We continue to try to improve our communication so that we can make moves forwards. We don't always get everything perfect. We had that small moment at the beginning of the race with the new tyres and then I couldn't get past Seb for a while. At that point I could see Albon pulling away and I though "Jesus, this race is falling through my fingers". But I just kept my head down and kept believing that I would eventually just pick up pace of some sort at some stage. And that's what I did.

A few laps in you were over a pit stop behind the leaders, you were nowhere. At which point did you think: "I could win this"?
LH: There was a point at which Seb was pulling away from me and I couldn't figure out at the time what it was. I was checking my temperatures. I didn't know if it was because the tyres were overheating or they were too cold. They went through a drier patch. I went through the real rough phase of the graining on the tyres and then it started to come back, the grip started to come back. The track was drying in some areas and I was improving my driving lines the whole way through the race and I started to pick up pace. And then Seb pitted and for me I knew that wasn't the right choice personally and so I decided to stay out and as the tyres got more and more slick that's exactly what you needed. Fortunately that intermediate tyre holds temperature. If I went out on new slicks I wouldn't have made it round.

Your tyres are completely slick, they are naked, they are bald. You overruled the team in the end, you didn't fancy splashing down a wet pit lane. You though you could get it to the end.
LH: Well, you remember I lost the world championship in the pit lane and I learned my lesson from 2007 that's for sure. I felt like I really had it under control and the grip was feeling good and I was going to deal with the rain if it dropped… oh wow.

The ninth podium of your career and your first since Baku in 2018; just how much pleasure did this one give you?
SP: A lot, you know, especially coming from the last race where we really missed it on the strategy, I think also for the team, they deserved this one. We've been so close in Austria, race two, in Imola. Now it's a great result for the team and still we're so close to losing it all with the Ferraris coming back at us very strongly. Holding onto those tyres was a big challenge and I think it was about time to end the race for us and a great result, a lot of points for the team and yeah, I'm please with that.

And Checo, your teammate stopped for a new set of intermediate tyres. Were you tempted to do the same?
SP: Yeah, I think at the time, especially when everyone was stopping it would have made sense, early on. I got the feedback that he - my teammate - grained the tyres straightaway, so the team decided to keep me out a bit longer and then we, as the race panned out, we basically carried on with that set to the end.

Sebastian, what a tremendous race for you this afternoon, exciting, right to the end, but can we go back to the beginning first of all and can you tell us about that start from 11th to 3rd at one point, I think?
SV: Yeah, yeah it was a good start. I think I just anticipated it to be very, very slippery, off the line. Made up a few places already there and then yeah, I wasn't one of the ones who tried everything into turn one and obviously there was a Renault that spun, which I think was Daniel, I'm not sure. Was it Esteban? Alright, there was a Renault that spun and yeah, I think everybody who was in that group obviously was back to the outside and I could just snatch the inside line and make up a lot of ground. Then I think it was good to have clear track ahead and benefit from that at the beginning of the race. When we then pitted for inters, I think it took a little bit too long for us to get into the groove. I lost a couple of positions which then later on I was catching up the field again. Yeah, I had a good battle at that stage with Lewis for a couple of laps and we pitted again, the tyres then grained very quickly and I think in that part of the race maybe I was too conservative, otherwise I could have been even better and maybe less exciting at the end but better in terms of positioning but yeah, nevertheless, happy. Obviously I was able to close the gap towards the end. Sergio was right on the limit, I don't think he had anything… not even another lap left in his tyres so it was really close. Also across the line I was hoping for a benefit on traction but he just saved it over the line. Obviously Charles made the mistake and then it was very close for the three of us. It was a fun afternoon.