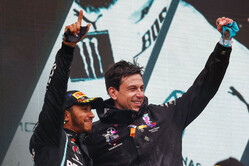 Last week the Pitpass team watched Doctor Sleep, which is described as the sequel to Stephen King's excellent book turned movie, The Shining.

The team was glad that it had been informed, for in reality this extremely silly movie had little to do with the 1970s classic.

We say this because thus far this weekend the Turkish Grand Prix has been as far removed from the norm as it could possibly get and at times almost - we stress almost - as silly as said Doctor Sleep. (A curious name for a movie which could seriously be considered as a cure for insomnia).

Washing a track that has been resurfaced after Pirelli had made its tyre choices we can just about handle, but the unseasonal temperatures, dogs, cranes and just about everything else have threatened to turn this event at which Lewis Hamilton could secure his seventh title into a laughing stock.

Even overnight, ahead of today's race, AlphaTauri stripped down Pierre Gasly's car ahead of an engine change, before changing its mind and putting the whole thing back together again, leaving the hapless Frenchman facing the threat of starting from the pitlane.

Then there's both Alfas getting through to Q3 and starting ahead of the Ferraris, not to mention the Points starting from pole and third, ahead of World Champion-elect, Lewis and his teammate.

Indeed, heading into today's race nothing would surprise us, so with that we feel that rather than make any predictions we could come to regret we will simply sit back and 'watch the show'.

That said, clearly miffed at losing pole, Max will be keen to dispose of young Lance as quickly as possible, though his cause will not be helped by having to start on the 'dirty' side of a track that has proved consistently problematic.

Despite yesterday's warnings it appears that this will be a dry race with no threat of rain. Indeed, as the drivers wake to sunny skies for the first time this weekend, even the predicted overnight showers failed to materialise. However, let's not forget that even in the dry grip was minimal, so expect a hairy opening lap and possibly a few 'incidents'.

Pirelli admits that this is one of the hardest races to predict a strategy for, owing to a number of different factors. The asphalt is extremely slippery, with rapid evolution, but how much grip it will ultimately offer remains unknown.

On paper, a two-stopper is quicker - but teams always prefer a one-stopper, especially if they can somehow manage to do it on the two softer compounds this weekend. Right now, that seems almost impossible if graining on the soft stays the same as it's been so far, but some teams might still try it.

Alternatively, they might still go for a one-stopper using the hards, if they can get it to work.

In theory, a two-stopper is quickest: with two stints of 16 laps on the softs plus a medium stint of 26 laps (perhaps as the middle stint). Another way of doing it, if there's graining on the softs, is just one 14-lap stint on the red tyres with two 22-lap stints on the mediums.

If it's warm enough to switch on the hard compound, the teams could try a one-stopper with 30 laps on mediums and 28 laps on hards. Alternatively, 20 laps on softs and 38 laps on hards.

At which point... an hour before the start... it starts to rain. Seriously, where did that come from? If Bernie was still in charge, we'd be looking for the sprinklers.

At which point... all bets are off.

While Gasly is facing the prospect of starting from the pitlane, which in fact be a benefit under the circumstances, Sainz was handed a 3-place grid drop for impeding Perez and teammate Norris was given a 5-place drops for not respecting the yellow flags following Latifi's Q1 off. Russell, who was due to start from the back of the grid following an engine change, was also handed a 5-place grid drop (!) for committing the same offence as Norris.

The pitlane opens and the drivers begin to head out... on full wets.

And if anyone needs proof of how difficult conditions are, Giovinazzi aquaplanes off track and hits the barriers. Not hard, but enough to damage his front wing and leave him stranded in the gravel.

Russell spins into the pit lane entrance, breaking his front wing in the process. "I was at walking speed," he reports, "it's ridiculous".

At this point the stewards confirm that Gasly has to start from the back of the grid.

Ahead of the national anthem it stops raining, however there is a 60% chance of further rain.

Both Williams are to start from the pitlane, Latifi having (appropriately) had his car changed to a wet set-up, and Russell having missed the cut-off deadline following his pitlane mishap.

Hamilton is advised that it will be a 'normal' start as opposed to behind the Safety Car.

All are starting of full wets bar the Williams pair who are both on Inters.

The field heads off on the warm-up lap.

Stroll arrives on the grid and awaits the arrival of his rivals who are taking their time.

They're away. Stroll gets away well both Red Bull are fighting for grip and barely able to move. Verstappen, who initially got off the line well, then almost came to a standstill as he struggled for grip, is passed by both Mercedes, both Renaults and Vettel before he's even got to Turn 1, while Albon is also looking for a way past.

In Turn 1, Ricciardo has to avoid Hamilton, who has the inside, and clips Ocon who spins, leaving Bottas to spin also in a bid to avoid the Renault.

Both Bulls take advantage of the situation and subsequently pass Ricciardo, while just behind Magnussen and Raikkonen appear to touch.

Now back in control, Verstappen is all over Vettel.

No problems for the Points, with Stroll leading his teammate who is comfortably ahead of Hamilton. The Briton runs wide in Turn 9, which allows Vettel and Verstappen to close in, and subsequently pass the Mercedes.

Adding insult to injury Hamilton is subsequently passed by Albon in Turn 12, as the world champion fight to keep his car on the black stuff, clearly unable to fire up his tyres..

At the end of lap 1, it's Stroll, Perez, Vettel, Verstappen, Hamilton, Albon, Ricciardo, Raikkonen, Sainz and Magnussen. Bottas is 18th.

Ocon pits at the end of lap 1, the Renault driver switching to Inters, as Verstappen is all over Vettel.

Verstappen has a big moments as he goes over the kerb, losing ground to Vettel while allowing Albon to close in.

Out front, Stroll is 5.3s ahead of his teammate, who is 7s clear of Vettel.

Stroll continues to set a blistering pace as things begin to settle down. Verstappen complains that he is unable to follow Vettel.

"Don't give me new tyres again," warns Hamilton, "this is not the right idea."

At the rear of the field, Ocon passes Latifi as the Williams pair struggle on the Inters which will take another couple of laps to come into their own.