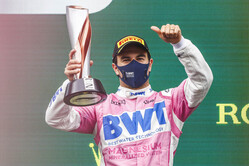 Sergio Perez: "We've come close to a podium several times this year, so it's great to enjoy the moment now with the team. It was an exciting race and a difficult one all the way to the end. I was trying to look after the tyres, push at the right time to keep the temperatures in the right window, and learn the track all at the same time. It's a great result and we called it exactly right. When I crossed the line, I told the team that I didn't think the tyres could last another lap! They were vibrating like hell at the end. It was about keeping it on the track and making the right calls, which we did. The key was managing the intermediates at the beginning and end of the second stint, it made a huge difference. Lewis was on another level today and, once he got by me, he controlled the race. So, second was the best we could achieve and we did a great job to keep the Red Bulls and Ferraris behind. I had no idea Max was chasing me with all the spray and my mirrors being fogged up: I just saw him run wide and then disappear. There was also a crazy end to the race with Charles! I made a little mistake into Turn 9 and he got by me, but I was able to cut back in front at Turn 11 and then Seb got through too! We're all delighted with today's result and it was a great effort by the team. We're going to enjoy it tonight!"

Lance Stroll: "It's really hard to understand what happened today and we need to go away and figure it out. I made a good start from pole position and I was able to build up a lead of over 10 seconds in the first stint, which gave us a real platform for the second stint to get a great result. Throughout the race, I was struggling with graining on the intermediate tyre. The team made the right call to pit when we did because the graining was extremely difficult and it didn't look like slick conditions would ever arrive. But we then had significant graining on my second set of intermediates, and I couldn't push to make up places. In hindsight, maybe staying out would have allowed the tyre to clean up, but it's easy to say that now. Getting pole yesterday was a great achievement, but the points are scored on Sunday. It was fun to lead so many laps, but we didn't lead enough! While I'm frustrated today, Checo's scored valuable points and we'll switch focus to the final few races."

Otmar Szafnauer, CEO & Team Principal: "A podium is a great result for the team after an excellent drive by Checo. We can be very proud of the fact we led a significant amount of the race in very difficult conditions with both cars. As we've come to expect with Checo, he managed the wet tyre very well early on and the team timed his switch to intermediates perfectly. To manage the intermediate on a changing track surface for 48 laps was a huge challenge, but he managed it to secure P2. It's a shame Lance didn't get the result he deserved. He handled the pressure of starting on pole position very well. He was flawless today and carved out a lead of over 10 seconds, when his tyres worked as expected. It was tough to judge the conditions, but we made the right call to switch Lance to intermediates, rather than wait for slick conditions that ultimately never arrived. We need to look into why Lance struggled so much with graining on the new intermediates because that prevented him from joining Checo on the podium. Regardless, today's result is a memorable one that has lifted the team back into P3 in the Constructors' Championship, which is a real boost going into the final few races of the season."