Stroll and Norris summoned by stewards 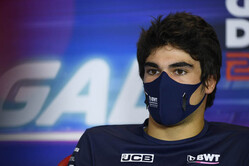 Pole-man, Lance Stroll and Lando Norris have both been summoned by the Istanbul stewards for allegedly not respecting yellow flags in Q1.

The incident happened in the final moments of Q1 in a chaotic qualifying session, when Nicholas Latifi went off at Turn 8.

In the moments after Q1, Haas driver Kevin Magnussen was incensed that a number of drivers had failed to slow for the double waved yellows, and subsequently improved their times, while the stewards said the incidents would be investigated after Q3.

While Stroll could face a grid penalty that would cost him his pole position, McLaren driver, Carlos Sainz is under investigation for allegedly impeding the Canadian's teammate, Sergio Perez.

It is thought that a number of other drivers may have flouted the yellow flag rule and may yet be summoned by the stewards.