Rain adds to teams' trials and tribulations in Turkey 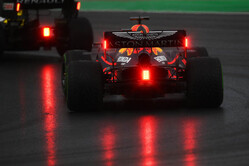 As if things weren't hard enough for the guys, fate appears to be further muddying the waters today, as the Intercity Istanbul Park awakes to much cooler temperatures than yesterday and rain... or rather drizzle. This follows heavy rain overnight which had already left the track 'damp'.

If Lewis Hamilton thought yesterday was "terrifying", he may want to remain under the covers with Roscoe in his motorhome this morning.

Rain, of course, will wash any the meagre layer of rubber laid down yesterday, and to further complicate matters tomorrow is expected to be warm and dry, so the teams face a real dilemma in terms of set-up.

The situation isn't helped by the fact there are no support races, therefore there's nobody available to help clean the track.

In response to yesterday, Pirelli, which made its compound choices before the track was resurfaced, has increased the minimum tyre temperatures by 1psi to 24psi front and 21psi rear.

As if all this wasn't enough, having clamped down on track limits at Turns 1 and 14, Michael Masi has now added Turn 6 to the growing list of corners where naughtiness will find drivers having their times deleted.

Despite the conditions, no sooner have the lights gone green than Grosjean heads out. He is on Inters, as is Vettel who follows.

Leclerc is next out, along with Albon, all four drivers slipping and sliding their way around the track.

"It's much wetter on the other side of the circuit," reports Albon, who is told the rain is coming from Turn 8. Meanwhile, Vettel gives a corner by corner weather update.

Even at low speed Perez spins at Turn 7.

Replay shows that Ocon actually got clipped by Leclerc. "He hit me," reports the Frenchman.

In quick succession, Norris and Vettel both spin.

Ten minutes in and the rain increases in intensity, which, in combination with a blustery wind, sees a number of drivers switch to full wets.

No sooner is Sainz warned of a slippery surface at Turn 10 than he spins at Turn 7.

Fifteen minutes in and the only driver yet to appear is... Lewis Hamilton.

Finally, Hamilton heads out, on full wets. Having gingerly explored the track the world champion heads back to the pits.

While most follow Hamilton's example and seek sanctuary in the pits, a few hardy souls continue, including Leclerc. However, the youngster almost comes to regret his decision when he spins at Turn 3 and is lucky not to hit the barriers.

Soon only Vettel and Raikkonen are on track.

Leclerc is unhappy that he has been called in following his spin, the Ferrari driver feeling he needs more practice in case the conditions are similar tomorrow.

In fact, as Vettel reports "more water, all water now", it is predicted that showers are expected overnight tonight, again in the morning and just about start time.

Even on the full wets, Sainz, a man with such conditions in his DNA, manages to spin.

As the rain increases in intensity again, the few remaining brave souls head back to the comfort of their garages.

"With just over 20 minutes left to go, everyone is in the pits," says Pirelli. "Rain is getting heavier and temperatures cooler: 12 degrees ambient and 13 degrees of track temperature now. With qualifying taking place in less than three hours, nobody wants to risk damaging their cars."

Currently it is anticipated that the rain will cease around 15 minutes after the end of the session. However, the track will remain damp for the start of qualifying.

With ten minutes remaining, the AlphaTauri pair venture out on full wets. They are followed by Raikkonen and Giovinazzi.

It is not entirely improbable that both teams are playing the long game here, anticipating set-up needs for Q1 and possibly beyond.

Giovinazzi spins at Turn 3, the Italian clipping the kerb and losing the rear of the Alfa. He brushes the barriers, losing an endplate in the process, but there's no significant damage.

"This condition is so bad," he adds, almost as an afterthought, as he subsequently spins again in Turn 12.

Onboard reveals that even at low speed the cars are almost undriveable.

"There's just no grip out here, shocking," admits Hamilton. Meanwhile, Bottas heads into the pitlane, the Finn doing well not to hit the barriers in the process.

As the session ends, Raikkonen, the sole remaining runner, heads to the pit straight for a practice start.

The session ends. For what it's worth, Verstappen is quickest, ahead of Leclerc, Albon, Ocon, Norris, Vettel, Perez, Bottas, Magnussen and Stroll.

Ricciardo is eleventh, ahead of Sainz, Giovinazzi, Gasly, Grosjean, Raikkonen and Kvyat, with Russell, Latifi and Hamilton all failing to post times.