S*** with a capital S, says Hamilton of Istanbul track 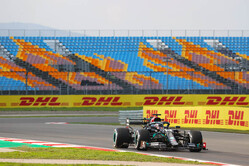 Somewhere in there, recalling the much used adage of turkeys looking forward to Christmas, there has to be a joke about 'looking forward to Turkey'... for the sport's return to the Intercity Istanbul Park has thus far proved to be a disappointment.

Drivers who were looking forward to racing here are now wondering what they've gotten into, as they struggle for grip and are unable to get anywhere near the pace witnessed last time out in 2011, far less beat it.

Much of the problem lies with the fact that just a few weeks ago officials chose to resurface the track, not exactly helping matters when they chose to wash it down ahead of today's opening session.

The driver's frustration is exacerbated by Pirelli's choice of compounds this weekend, the Italian manufacturer going for the hardest in its range.

"It was a bit of a disaster today to be honest," said Lewis Hamilton following today's action. "This track is such a fantastic circuit and I really don't fully understand when they spend millions to resurface a track.

"I know it's been sitting around for some time," he continued, "but they could have just cleaned it maybe, instead of wasting all that money. Now the track is worse than Portimao was when we had the brand-new surface there. So for us at least, the tyres aren't working.

"You can see it, it's like an ice rink out there," he sighed, "so you don't get to enjoy the lap as you normally would at Istanbul and I don't see that changing.

"It's terrifying the whole way around," he admitted. "It's almost like there's wet patches all over because you are on slicks, accelerating and it just goes so fast. It's because you are way, way below the temperature window.

"These tyres, they are so hard and only work in a certain window, so if you are 10 or 20 degrees below they are not working.

"For some reason this surface is so smooth, a lot of the older circuits, are a lot more open between the stones, so it works the tyre more. This one is super closed, flat and shiny and I guess there's oil seeps from the tarmac.