Stroll can bounce back, insists Green 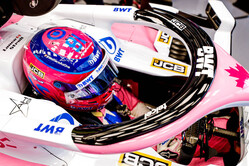 It was all going so well. Though forced to retire from the season opener in Austria due to an engine issue, Lance Stroll subsequently put together a string seven races in which he scored points.

A sixth in the Anniversary race at Silverstone, was followed by a fourth in Spain, the Canadian going on to claim a podium finish at Monza.

But then it all started to go wrong, a heavy crash at the restart in Mugello was followed by a first lap crash in Sochi. Missing the subsequent race at the Nurburgring due to illness, he was back in action at Portimao where he was clashed with Max Verstappen in then came Imola, where a first lap clash with Esteban Ocon was followed by a pit stop during which he hit one of his crew.

Racing Point technical boss, Andrew Green admits the youngster has taken a physical and mental "battering" in recent weeks and it is up to the team to help him regain his confidence and self-belief.

"Obviously he's not where he was," says Green, according to the official F1 website. "From where he was at Monza to where he is now, there is a lack of confidence, which we'll have to work on over the next week or so trying to get him back again.

"The illness did knock it out of him, for sure," he adds, "that's something we hadn't really foreseen. We'd heard about the length of time it can take to recover from the illness and I think it is taking some time.

"He just needs to get his confidence back again, believe in himself again, and we'll get the Lance back that we had for the first two-thirds of the season," adds Green.

"He's taken quite a battering physically and mentally, it was quite a big accident in Mugello, so I think that probably dented his confidence, and then not to be fit for a couple of races."

At one time fourth in the driver standings, Stroll's slump has seen the Canadian drop to eleventh.

"Half of it is he probably just needs an arm around him, a bit of a hug, and say come on let's pull yourself together now and get on with this over the last few races and try and get the team back to third in the championship.

"He's more than capable of doing it, it's just a bit tough on him at the moment."