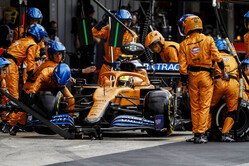 Lance Stroll's Portuguese Grand Prix was pretty much summed up in the moment when the Canadian, now running in last position, asked his team; "what's happening, should we save the engine?", a clear call to bring his miserable afternoon to an early end.

Sure enough, the youngster subsequently became the afternoon's only DNF when he entered the pits and drove straight into his garage.

The Canadian, who has been handed two time penalties during the course of his race, one for continuously exceeding the track limits and the other for an incident involving Lando Norris, will be glad to put the Portimao weekend behind him, especially on a day his outgoing teammate, Sergio Perez fought back following a first lap tangle with Max Verstappen.

Norris, the victim of a poor move reminiscent of his Stroll's clash with Verstappen on Friday, claims the Canadian doesn't learn from his mistakes and merely repeats them.

"I don't know what he was doing really," said the McLaren driver. "He went to the left, which I was quite surprised by when he could have very easily could have gone to the inside.

"I was easily halfway alongside and he just turns in," he continued. "He obviously didn't learn from Friday, but he doesn't seem to learn from anything he does.

"It happens a lot with him so I just need to make sure I stay away next time."

According to the stewards, Stroll made a late move around Norris at the end of the main straight. He then drove straight towards the apex of turn 1 while Norris was still partially alongside.

"Norris moved as far to the apex as he could just avoiding the aggressive sausage curb on the inside," said the stewards, "and thus did everything he could to avoid the collision."

Deeming that Stroll was predominantly at fault for the collision, they handed him a 5s penalty and 2 penalty points.

"Some points were on the table," said Norris, "maybe one, maybe two... I don't know. Some points at least.

"We needed it, we need the points, even if it's just one at the end of the day because we've had a tough few weekends," he added. "We had the speed this weekend to bounce back and have two cars in the points, but just not today.