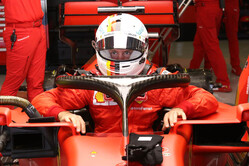 Sebastian Vettel admits that he is unable to match the performance of his teammate, Charles Leclerc, who he believes is in "another league".

While Sebastian Vettel says he wants to leave Ferrari with dignity, it is unlikely that the German is going to be able to provide the Maranello outfit with a parting win or even a podium.

Though Charles Leclerc will start today's Portuguese Grand Prix from the second row, the four-time world champion will start from the eighth following another unconvincing performance.

While the Monegasque has averaged 7.9 in qualifying this season, Vettel has averaged 12th, while his 17 points pale in comparison to his teammate's 63.

"At the moment it's beyond me," he told Sky Germany. "It's not just beating, it's like another league.

"I try everything I can," he added.

"I think the laps I make, which I am content with, are still too slow," he continued. "At the moment there is nothing more I can do than just getting everything out of myself and the car."

His cause in qualifying wasn't helped by his decision to stick with the mediums, when most - though not his teammate or the Mercedes pair - had switched to softs.

"The whole weekend I was struggling a bit on the soft," he admitted, "for me the tyre was always washing out and we opened the tyres very quickly and suffered graining.

"The medium seemed to be resilient," he continued. "I had a good feeling the first run, not so good laps, and then I thought easily I can do the time, but in the second run, I couldn't get the tyres to work and that was the end."

Sadly, the German doesn't expect things to be any easier in the race.

"The problem is we are stuck in traffic for the whole race so it's going to be the same as the last races," he said.

"It's very difficult to feel the rhythm when it's different every time around, which is normally tyre temperature related, and seemed to make a big difference this weekend so far, so we'll see what we can do."