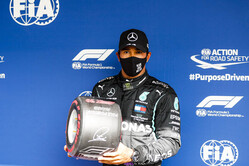 While Lewis Hamilton and teammate, Valtteri Bottas set their best Q2 times on the yellow-banded medium tyres, as did Charles Leclerc, they chose the same compound for their final qualifying runs, again eschewing the softs.

Critically, however, for his final run, Bottas opted for one timed lap, while the world champion went for two.

"Combined with the smoothness of the track, the difficulty that we have with these tyres, and the battle that I'm having with Valtteri, it's making it hard and harder for me each weekend," admitted Hamilton. "He's been quickest all this weekend, all through practice, and even into some of this session. So, I didn't know whether or not I was going to get a lap that would be able to compete with his.

"I was always off by a tenth, half a tenth, whatever it is," he continued, "but that last decision I took at the end is what I think really created the opportunity.

"We were both given the opportunity to choose between the soft and the medium tyre, which is kind of counter-intuitive going to the medium, because we usually just stay on the soft throughout Q3. But the idea of having an extra lap, an extra chance, an extra stab at getting pole looked good to me. So I chose to go that extra lap, and I think Valtteri chose the one. But he still did a great job.

"It was still very, very tough, I had to dig very deep," he admitted, "luckily I think I got the last sector just about right. But still, it was so close."

"We'll obviously lose a bit of performance to Max," he added, referring to the fact that the Red Bull driver will start on the softs, "and the guys behind on the softs.

"I really don't know what to expect tomorrow, it's supposed to rain. So that means it's going to be the hardest day for us all if it does. Wind and rain... that would really be like ice."

"The medium actually felt a tiny bit quicker than the soft," explained Bottas of his decision, "and then it was choosing if we do two timed laps, with a cool down in between, or just one timed lap.

"Obviously, with one timed lap you can have less fuel in the car, but you might struggle with the tyre warm-up," he admitted. "I went for that. It was my decision to go for one timed lap, because it worked in Q2, but apparently it seems like doing two timed laps for Lewis was better.

"It was a decent lap, not perfect," he continued. "It's been tricky here to get really clean laps this weekend because of the way the track is, but I mean the lap was good. I think ultimately I should have gone for two timed laps as well."