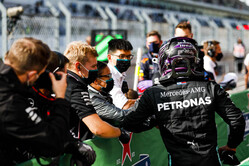 Well if nothing else, thus far the Portuguese Grand Prix has been 'different'.

We've had the immolation of Pierre Gasly's AlphaTauri, Max Verstappen turning the airwaves all shades of blue following his clash with Lance Stroll, Renault getting its base tyres mixed up with its prototypes, God knows how many times deleted and then the drains starting to play up courtesy of Sebastian Vettel.

Even before this morning's session drivers had found their track time compromised, but then Mr Vettel brought proceedings to an end just as the qualifying sims were about to reach a crescendo.

Consequently, we have little idea of the true pecking order.

While Valtteri Bottas has set the pace in every session, his teammate must never be written off. Then there's Mr Verstappen, who has been very quick, especially on the mediums.

This of course poses the question of whether the likes of Mercedes and Red Bull will seek to qualify on the yellow-banded rubber.

Ferrari, which has a number of updates here, including a new diffuser, is looking stronger, while Pierre Gasly, Carlos Sainz and Sergio Perez are also looking good.

Despite the various dramas, or perhaps because of them, Portimao is living up to expectations, and proving to be every bit of fun we expected it to be.

That said, the issue with track limits, traffic and the difficulty in overtaking are likely to have an impact over the next hour and tomorrow.

At which point, just minutes before the start of the session, race control announces that there will be a delay of thirty minutes whilst the other drain covers are checked following this morning's incident. Which begs the question, why weren't they all checked in the two hours since FP3.

As work continues on the repair to the piece of drain cover broken earlier, one wonders if that 30 minute delay estimate might have been overly optimistic.

At 14:25 the drivers begin climbing into their cars... again.

The light go green and understandably there is a rush to action. In no time at all there are 14... 15... 16 drivers on track, all running the red-banded softs.

Kvyat is the first driver to post a time, the Russian stopping the clock at 18.408. Moments later Perez posts 18.040.

All but Verstappen and the Black Arrows are on track.

Ocon goes second, ahead of Gasly, Kvyat, Raikkonen and Giovinazzi.

An 18.244 sees Ricciardo go second, with Norris going third ahead of Ocon.

Moments later Sainz goes second with an 18.156 as the timing screen continues to light up with lots of greens and the occasional purple.

The Mercedes pair head out as Vettel goes sixth and Stroll 12th.

Bottas goes quickest with a 17.064, while Hamilton aborts his lap.

A 17.547 sees Norris go second as traffic is clearly becoming an issue.

Again, Latifi becomes the first driver to have a time deleted.

A 17.517 sees Gasly go fifth, ahead of Norris, Sainz, Stroll and Verstappen.

Vettel has his time deleted and therefore remains 14th.

Purples in the first two sectors are enough for Hamilton to post a 16.828 despite a poor end to the lap.

With 5:50 remaining, the usual suspects inhabit the drop zone - we're talking Williams, Alfa and Haas, while Vettel, Kvyat and Ricciardo are hovering.

While Hamilton, Verstappen, Bottas, Perez and Leclerc appear to have settled for their times, the rest head out.

Gasly goes seventh with a 17.517 as Russell shapes up for a second flyer.

A PB in S1 for Raikkonen, likewise Kvyat.

Gasly goes fourth and Vettel seventh, but the German is demoted when Albon improves.

Stroll's time is deleted but the Canadian gets through by the skin of his teeth.

The lights go green for Q2, and it is going to be interest to see how the tyre strategy develops.

Both Ferraris are on mediums, as are the Black Arrows, while the Bulls are on softs.

Bottas posts a 16.466, while Hamilton and Vettel abort their laps.

Gasly goes third and Albon fourth, only to be demoted when Perez posts a 17.332 to go third.

Hamilton goes second with a 16.824, but it looked to be hard work for the world champion.

Verstappen goes third with a 17.096, ahead of Perez, Sainz and Norris.

Vettel improves (17.976) but remains 14th. Clearly, the German will have to switch to the softs. As will Leclerc probably as he is only 8th.

"I still have no grip," complains Verstappen, who is clearly struggling with the softs.

Gasly, Stroll and Kvyat head out for the final assault.

As more drivers head out, it appears that only the Mercedes pair have settled for their times.

Albon fails to improve on ninth following a poor final sector, as the Black Arrows do in fact head out.

Verstappen posts a PB in S1, as does Russell.

Both Ferraris still on the mediums.

Ocon can only manage 11th, as Verstappen remains third.

Leclerc remains 8th, while teammate Vettel can only manage 15th.

Out come the yellows as Ricciardo is off and clouts the barriers in Turn 11. Though his day's work is done, he has made the cut having qualified tenth.