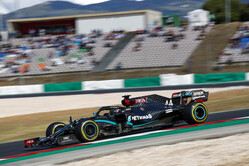 Valtteri Bottas set the quickest time in free practice for Mercedes on the P Zero Red soft tyre, as Formula 1 returned to Portugal for the first time since 1996.

Conditions were mixed throughout the day, with track temperatures fluctuating. This added to the difficulty of keeping the cars on the track at a spectacular brand new venue for Formula 1, with FP1 getting underway on slippery and 'green' asphalt.

Bottas was fastest in both sessions today: using the P Zero Yellow medium tyres in the morning and P Zero Red soft tyres in the afternoon.

With the three hardest tyres in the range nominated, drivers were able to push hard during both sessions to find the limits.

For the first half-hour of FP2, all the drivers also got their first taste of what could be the tyres for next year, trying out different 2021 prototypes in a blind test with the run plan defined by Pirelli. Each team received three sets of prototypes to test, with one car required to complete a longer run while the other focused on a back-to-back comparison over short runs.

The FP2 session was subsequently interrupted by a lengthy red flag session with just over half an hour left to go, after Pierre Gasly's AlphaTauri caught fire. This was quickly followed by another red flag, when two other cars came together.

As a result of these interruptions, the teams only got to run the soft tyre for the final disrupted half-hour of the session, having used just the P Zero White hard and P Zero Yellow medium in the morning.

As there was little running on all compounds and a high degree of track evolution, the tyre gaps can only be estimated but they appear to be around 0.9 seconds between hard and medium, and 0.6 seconds behind medium and soft.

For this race and Turkey, the standard allocation of tyres has been adjusted, with one less set of soft tyres and an extra set of hard tyres to cope with the severity of both circuits.

Mario Isola: "It was very useful for us to run the 2021 unmarked prototype tyres during the first 30 minutes of FP2 today, as we gathered plenty of data that will be relevant as we validate the tyre specification for next year. A big thank you to all the teams and drivers for undertaking this important test. As a result of doing the test, as well as the long interruptions to FP2 this afternoon, the teams completed less running than usual, and so there is a lack of data on long runs with the nominated race tyres. This will definitely be a challenge for the rest of the weekend as Portimao is a brand new track to the calendar that nobody is very familiar with. In the morning, due to the 'green' track, we experienced some graining - which was no big surprise under the circumstances. As expected, the situation improved over the rest of the day, with a lot of track evolution undoubtedly still to come as more rubber is laid down."