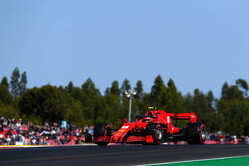 When the 17th Portuguese Grand Prix gets underway at 13.10 local (14.10 CET) tomorrow at the Autodromo Internacional do Algarve, Charles Leclerc will start from fourth place on the grid. He has thus equalled his best grid placing of the season for a third time, after the Eifel and British GPs. He will start on the Medium compound tyres which seem best suited for the task. Sebastian Vettel fared less well, unable to make the cut from Q2 and will start from 15th spot.

The day got off to an unusual but pleasing start in this "new normal" season, with a traffic jam caused by spectators coming to the track. 27,000 of them are allowed in per day, with many of them today sporting Scuderia Ferrari colours.

Having made it through to Q2, (in Q1 Leclerc was 6th and Vettel 8th) the two SF1000s took to the track on Medium tyres, with the aim of using that compound for the race start: Charles immediately posted an excellent 1:17.367, while Seb could only manage a 1:18.116. Both drivers came in for another set of Mediums. However, it was clear that track conditions were very changeable, especially because of the wind, with very few drivers managing to improve their times. Seb did go quicker, posting a 1:17.976 but it wasn't enough to get to Q3 and he had to settle for 15th. Leclerc got through in eighth place, on the Mediums as planned.

In the final 12 minutes, Charles did two runs on the Soft tyres. His first was a 1:17.456. In the closing stages, when Alex Albon (Red Bull) and Sergio Perez (Racing Point) went quicker, he went out again to improve to an excellent 1:17.090, good enough for fourth on the grid, less than two tenths slower than Max Verstappen, third in the Red Bull and just over four tenths off Lewis Hamilton's pole time in the Mercedes.

Charles Leclerc: "I am very happy with my lap and I think we managed to get everything out of the car today. Congratulations to the whole team for the great job they have done, both in Maranello and here at the track. The latest updates we introduced here have also added a bit of performance to our car and the last few qualifying sessions show we are heading in the right direction.

"Already yesterday, I had a good feeling about Saturday, while there are still various things we need to look at before the race. But I am very happy to have got through Q2 on the Medium tyre, because I'm sure it's the ideal tyre for the start of the race. In Germany we suffered on the Soft tyres in the low temperatures, while here it's not as cold and we have the Mediums. I need to get a good start and if I manage that, I can be in the fight for a strong result."

Sebastian Vettel: "I'm not happy with today as I struggled a lot to put the laps together. It was very difficult to get the tyres to work and find a good rhythm. In practice I was happy with the Mediums but in quali I had too many issues, probably because of the difficulty of getting the tyres up to temperature.

"Starting at the back of the grid is not ideal, as the traffic at this circuit will probably be a big problem. However it will be a similar situation to what we have experienced at some of the recent races. Unfortunately there's not much we can change on the car and we will have to do our best from the back."

Laurent Mekies, Sporting Director: "This afternoon's qualifying went well, with Charles securing the same position as at the previous round, albeit in very different weather. We brought some more updates here for the SF1000 and, from what we have seen so far, they appear to have delivered a bit more performance. We know it's nothing major, but it's enough to be fully in the very close fight for the places right behind the top three drivers. The important thing is that it shows our development work is going in the right direction, for the end of this season, but more importantly for the next.

"The team worked well, trying to give the drivers everything they needed on a difficult track that we have never raced on before. For that reason and also because the weather forecast is uncertain, there are a lot of question marks over tomorrow's race. Considering our difficulties on the softest compound, we aimed to get out of Q2 on the Mediums and we managed it and that will be an important factor in terms of strategy. Sebastian was right on the limit after his first run and in these situations, the driver's feel for the car is vital, which is why he stuck with the Mediums for his second run in Q2, but it was not enough to improve and so he will start from the eighth row."