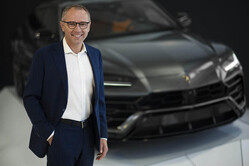 The appointment of a former Ferrari team principal to the role of F1 CEO was always going to be controversial, what with another ex-Maranello man being MD and technical boss while another heads the FIA.

However, F1 bosses were aware that the appointment of Stefano Domenicali would raise eyebrows, not to say hackles, within the paddock and among fans, yet pressed ahead with his recruitment determined that he was the right man.

"We went through a very broad search," says Carey in the latest Beyond the Grid podcast for the sport's official website, "looking at a complete range from A to Z of candidates.

"Going forward, what we felt was right, we wanted somebody who can maintain the momentum and continue to build on what we think we've put in place to grow the sport.

"One of the important things Stefano brings is a deep knowledge of not just the sport and the competition on-track, but the players in the sport, and therefore I think he can hit the ground running in terms of taking things forward."

While it was expected that team bosses would oppose the appointment of Domenicali, who spent twenty years at Ferrari, to a man they have welcomed the move.

"Stefano brings a unique personality to this, somebody that has great respect," said Carey. "Sometimes I feel that in this role you're sitting in the eye of a storm, with a lot of partners circling around. I think he brings a balance, and an even-keeled personality to navigate through what at times can be a very noisy situation.

"I think the combination of unique expertise and experience with a personality that can navigate through the various dynamics that exist make him ideally suited for this."

Asked who else was on the shortlist along with Domenicali, Carey refused to name names, even though it is known that Toto Wolff was approached, a move that Ferrari would most certainly have vetoed.

"I'm not going to get into who we talked to or considered," says Carey. "We went through a search of looking at a range of people across the board.

"I'm not going to comment on, and don't think it's appropriate to comment on, who we considered," he adds. "We only made one offer, and that offer was to Stefano, and we're thrilled to have him in place."