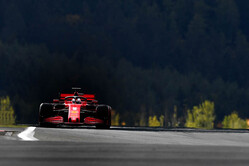 Charles Leclerc was in sparkling form in qualifying for the first Eifel Grand Prix at the Nurburgring. The cars only took to the track for the first time this weekend in the morning, after all of Friday's running time was cancelled because of bad weather. The Monegasque produced an almost perfect lap to go fourth fastest, equalling his best result of the season so far, from the first of the two races at Silverstone. He thus starts from the second row in his number 16 SF1000. Sebastian Vettel did not fare so well and was the quickest of those to fail to make the cut to Q3 and will therefore start from eleventh, on the sixth row. But at least he gets a free tyre choice for the start, unlike those ahead, who all have to use the Soft compound tyre.

The two Ferraris made it out of Q1 without too much difficulty, although Sebastian needed a second run. Charles made the cut with a great 1:26.857 and Sebastian then did a 1:27.107. In the second session, several drivers, including Charles and Seb, set a time on the Medium tyres, but then they all decided to go back out on Softs. Leclerc got through with a sound 1:26.240, but Vettel struggled, especially in the first sector, stopping the clocks in 1:26.738, eleventh fastest, the first out of Q3.

In the top ten shoot-out to define the front five rows, Charles used two sets of new Soft tyres. His first run was a 1:26.411, putting him fifth behind the two Mercedes and the Red Bulls with five minutes to go. On his second set, Charles did a perfect job of getting the tyres up to temperature on the out lap, improving his time in all sectors to cross the line in 1:26.035, which put him fourth. Tomorrow, the Eifel Grand Prix gets underway at 14.10 CET.

Charles Leclerc: "This qualifying result is possibly better than we expected, especially in these cold conditions, but we brought some updates here, which maybe made a small difference in the right direction, which is nice to see. I am happy about the way we are working and how things went today.

"I quite liked the fact we had just one FP session and went straight into qualifying. We made the most of the situation, even if we don't have much information about the long runs with high fuel. Especially in Q3 there was quite a strong wind, which made the car unpredictable.

"For tomorrow, we are all a bit in unknown territory, but one thing I know is that it'll be important to manage these soft tyres because they are pretty difficult in terms of graining. It's going to be a tricky race but that's what makes this weekend interesting."

Sebastian Vettel: "I tried everything, but I was really struggling with the car in the first sector and I was sliding a lot. It was a shame that we couldn't make it to Q3 even if I was feeling ok in the car and I think the pace was decent. I hope that with the free choice of tyres, we will have a bit more luck tomorrow.

"I only ran the upgrades in the afternoon, as we had very little free practice time and therefore had to make a comparison using the two cars running different configurations, but I don't think they made a big difference.

"Today I'm happy for the fans because the weather was better and they finally were able to see some cars on track."

Laurent Mekies, Sporting Director: "This was our best qualifying since the mid-point of the season, not just in terms of the result, but also because of the overall performance. Charles did a fantastic job: he was soon at ease with the track and got consistently quicker, ending up equalling his best Saturday performance of the season, getting everything out of his SF1000. Sebastian struggled a bit and could not make the cut out of Q2, but at least he gets a free choice of tyre for the first stint of the race.

"The minor updates we brought here and two weeks ago in Sochi have given us a bit more performance: nothing exceptional but when the gaps are so small, it doesn't take much to make a significant difference. The most important thing is that all these developments indicate that all the hard work taking place in Maranello is going in the right direction, which is a good thing for the final part of this season but especially for the next one.

"The outcome of tomorrow's race is even more uncertain than ever, as all the teams have far less data than usual, given that it's the first time in seven years that we have raced at this very nice track, added to which is the fact there was no running yesterday due to bad weather. Today's result means we can go for different strategies with our two drivers and we will try to make the most of any opportunity. Finally, I'd like to congratulate our reserve driver, Antonio Giovinazzi who secured his best qualifying result of the season, which is no doubt a welcome confidence boost for him."