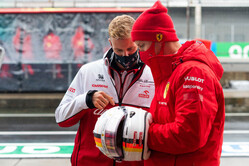 There was no track action on this Friday at the very first Formula 1 Eifel Grand Prix. Since yesterday, the Nurburgring has been shrouded in fog and clouds with rain falling constantly in the Eifel mountains. Visibility was too poor for the medical helicopter to fly, so that the pit lane exit remained closed for both of today's free practice sessions.

A shame, mainly for the thousands of fans who had braved the elements and did not get to see a single moment of track action. In pit lane, two people were equally disappointed with the lack of the first session. FDA (Ferrari Driver Academy) students Mick Schumacher and Callum Ilott were due to make their race weekend debut with Alfa Romeo Racing and Haas respectively. They will get another go, probably at the final race of the year in Abu Dhabi.

The race director was keen to get at least a few laps in and, to this end, the situation was updated every half hour. "It wasn't the best of days," admitted Sebastian. "It was a bit tiresome, waiting for each next announcement without ever getting the ok to get in the car. I am sorry mainly for the fans and the two FDA guys who didn't get to do a single lap. In the afternoon, in what should have been the second sessions, I had several chats, with my father who is here with me this weekend, with our Sporting Director and also with Mick, who said he was really upset at not being able to get in the car. I hope he'll get another chance as soon as possible. Tomorrow, conditions should be similar but let's hope we can at least go out for free practice at noon. It's been seven years since we raced here and we would need to try the track before qualifying. It goes without saying the work schedule for tomorrow is looking pretty busy."

Charles had also been keen to drive today, as this will be his first time at the Nurburgring in a Formula 1 car. "Unfortunately, from the moment I arrived in the paddock, it seemed pretty clear that we would not be going out of the garage," explained the Monegasque. "I had hoped we could have managed a few laps in the afternoon, especially as we had a few things to try on the car, but the situation didn't change. It's not great, but it's the same for everyone and it could make things even more interesting." "To pass the time in the afternoon, I doodled some drawings that you might be interested to see on my social channels," continued Charles, who added he was sad for the fans. "I saw them on the television screens, huddled in the grandstands, suffering in the cold and wet for nothing. It would have been nice to do at least a few laps for them."