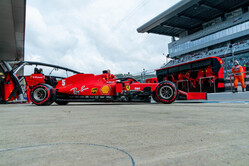 Qualifying at the Sochi Autodrom for the Russian Grand Prix did not go well for Scuderia Ferrari. When the race gets underway tomorrow at 14.10 local time (13.10 CET), Charles Leclerc will start from 11th on the grid and Sebastian Vettel from 15th.

In the first part of qualifying, Charles on the Soft tyres, immediately posted an excellent 1:34.071, which meant he was safe. On the same compound, Sebastian did a 1:34.730, not good enough to make the cut to the second part. So, while the Monegasque stayed in the garage, the German had to go back out with a new set of Softs and improved to a 1:34.131, just 60 thousandths slower than his team-mate.

In the next part, the Ferraris again went out on Softs: first to set a time was Charles in 1:33.239, followed not long after by Seb in 1:33.609. After all the drivers had set a time, Vettel was 14th, while Leclerc was ninth. The 15 remaining cars went out again to try and improve. Vettel and Leclerc were running just a few seconds apart, but at Turn 4, Seb lost control of the car, crashing heavily into the barrier. Fortunately he was unhurt, but it ended his session. Charles managed by a whisker to swerve around Seb's car and then the red flag came out.

At the restart, there was just over two minutes left and all the cars were bunched together, so that several drivers, including Charles, were unable to improve. However, two of them, including Lewis Hamilton who had yet to set a time, went quicker than the Monegasque, who therefore dropped from ninth to eleventh, thus failing to make the cut to the top ten shoot-out.

Charles Leclerc: "We definitely had the pace to do something good, much better than expected. Unfortunately, we missed our chance, so I'm pretty disappointed, but that's life.

"It is frustrating that we didn't make it to Q3 because I really believe that we had the potential to go through today. From the radio communications, I thought I had no margin to cross the line to start the fast lap so I pushed on the out lap and started my quick lap very close to Kvyat. There was actually a bit more time available, but we didn't exploit that, so we need to improve in that area.

"We are starting 11th with a free choice of tyres. I hope that we can benefit from this. The race is tomorrow, points are scored tomorrow and I will give it my all."

Sebastian Vettel: "When I crashed I was trying to improve my time. I hadn't had a good first sector so I was pushing. It seems that I was going too quickly and so I lost the car. It had already happened in turn 2 and then it happened again in turn 4. I tried to avoid the impact, but I couldn't catch it.

"Compared to the morning session, the track was quite different during qualifying and I struggled a bit more. I'm sorry to have made extra work for the team, but at least I think the car can be fixed."

Laurent Mekies, Sporting Director: "We're unhappy about qualifying for various reasons. Sebastian crashed, fortunately emerging unscathed, but the impact with the barrier did considerable damage to the car, which will require a lot of work by the mechanics to repair it.

"Charles should have been able to get into Q3 but he had a very hectic time in the final part of Q2. In a strange situation like this, it's difficult for all the drivers to get a clean lap and in fact, only four of them managed to improve their time in the final two minutes. Charles managed to start his lap in time, but unfortunately there was not enough of a gap to the car in front and he was unable to improve. For our part, in future, we will try and do a better job of evaluating the available time gap.

"Tomorrow's race will be long and demanding from many points of view and anything could happen. We will do our utmost to score as many points as possible."