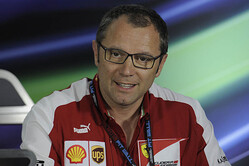 It is being reported - not by Eddie Jordan - that former Ferrari team boss, Stefan Domenicali is to replace Chase Carey as the CEO of Formula One.

There has been speculation over Carey's position for some time, with Mercedes' Toto Wolff one of a number of names linked to the role.

Domenicali joined Ferrari in 1991 and over the following years held a number of positions within the company until being appointed Sporting Director in 2002.

In 2007 he was named Jean Todt's successor as director of the F1 team, and a year later was appointed team principal.

The Italian was at the helm when Ferrari won its last Constructors' Championship in 2008, and despite Fernando Alonso finishing runner-up in 2010, 2012 and 2013, that was as good as it got, Domenicali resigning in early 2014.

He subsequently moved to Audi but then came his appointment as head of the FIA's Single-Seater Commission.

In early 2016 he was appointed CEO at Lamborghini.

The appointment of a former Ferrari man is unlikely to be well received by the likes of Mercedes and Red Bull, the Italian team having previously warned that it would use its veto to block the appointment of Wolff. Nonetheless, it is understood the teams have already been told of the move.

If true, Domenicali's appointment would see former Ferrari men in three key positions of F1 power, with Jean Todt president of the FIA until the end of 2021, Ross Brawn as Managing Director of F1 and in charge of its technical side, and now another Maranello man as F1 CEO.

Such a situation would surely give ammunition to those who claim Ferrari already wields too much power, the old Ferrari International Assistance meme revived in the wake of the Italian team's controversial secret arrangement with the sport's governing body following the investigation into its 2019 engine.

As recently as the Tuscan Grand Prix weekend he attended the Gala in honour of the Italian marque's 1,000th Formula One World Championship Grand Prix.

Neither F1 or Lamborghini has commented on the report.