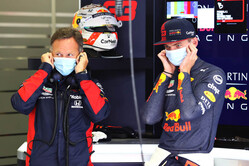 Formula One Management confirms that another 8 people have tested for the coronavirus in the last seven days.

Following twelve weeks in which just 7 people tested positive for the virus, in the last four weeks alone there have been a further 28 cases.

The Eifel Grand Prix weekend saw two members of the Mercedes team test positive which led to a number of team members being placed in isolation and the Brackley-based outfit having to fly out replacements.

Furthermore, whereas the week ending 2 October - when 10 people tested positive - and F1 confirmed that they were all "ancillary personnel" there have been no such admissions since.

Since testing began in July there have been 57,447 tests, with 38 testing positive.

The news comes at a time officials are considering whether to hold next weekend's Portuguese Grand Prix behind closed doors or merely restrict the number of fans allowed access.

The race - the first round of the Formula One World Championship to be held at the Portimao facility - is also scheduled to mark the first appearance this season of the VIP Paddock Club.