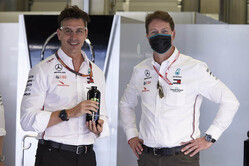 Daimler CEO, Ola Kallenius says that Mercedes is committed to F1, but warns that along with costs the sport's environmental impact must be reduced.

"We have as little reason to step out of Formula One as Bayern Munich has to step out of football," he said during a virtual roundtable discussion with journalists.

"The net financial impact will be halved in the next three years," he continued, referring to the budget cap which is introduced next year. "We have an even more aggressive cost reduction target in Formula One than for the rest of the company."

At a time Mercedes is witnessing increased sales of its electric and hybrid vehicles, he said that the company is "within striking distance" of meeting its carbon dioxide emissions reduction targets in Europe".

"It lies in the DNA of Mercedes to race," he continued, referring to the recent announcement that the company's performance division AMG, is to ramp up its presence on the F1 cars. "The first ever Mercedes was a race car, we did road cars and race cars.

"The new strategy going forward is getting the sub-brands a larger marketing platform. It's AMG, it's EQ, it's Maybach. I think it's good that each of those brands gets a specific touch. AMG is our high-performance brand. Formula 1 cars are high-performance cars.

"But in addition to that, we are also AMG. We represent AMG as a high-performance brand and we want to increase the visibility of AMG which exists today. There is technology transferred between the companies.

"It just gives it more marketing exposure to showcase the technology transfer that happens between AMG and the Mercedes F1 team."