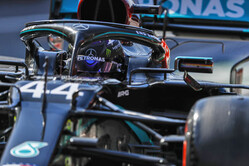 In the opening phase of qualifying, Mercedes, the Ferraris and Daniel Ricciardo were on mediums, while their rivals were on softs.

Soon the Ferraris and Ricciardo came to realise that the yellow-banded tyres were not the way to go, and while Lewis Hamilton, in particular, wanted to stick with the mediums, for his final run he was sent out on softs.

"In the debrief, that was discussed," revealed team boss, Toto Wolff, "and it's clear that the soft is the right tyre to start with, and Lewis agreed to that.

"The reason being that starting on the medium, you're losing about three or four metres against the soft, and all his competitors are around on softs," he added. "So it makes no sense to take big risks and a big gamble.

"You could clearly see in Q2 that nobody would have qualified on the mediums, so you would have had a real disadvantage for the first few laps. It was a clear decision," he insisted.

"Obviously Lewis doesn't like to be in P2 or worse," he admitted. "That's why an alternative strategy always makes a lot of sense, just accepting to follow a car is not how he operates. The soft was the right choice."

The lack of running on Friday, coupled with the change in conditions, the focussing on short runs over long, has all contributed to a weekend that is very much up in the air in terms of strategy.

"We're not so much in the dark," said Wolff, "it's just more of adapting to the new situation, working with less data, and accepting that tomorrow there will be learning by doing. The whole grid believes the soft tyre is a good tyre to start with, and then we'll see how that pans out, whether it's a two-stop or a one.

"Obviously there is no data from long runs, whether the hards or the mediums are the right choice. I find it super exciting."

"I could have got through on that tyre," said Hamilton. "I wanted to start on it, just because I always like to do something different, but the team chose for us to both be on the same tyre.

With conditions fro the race likely to be similar to those experienced in qualifying, he said: "The usual effects from the track getting colder is the front tyres usually suffer a bit more. We generally have a bit more understeer potentially. If there's safety cars, restarting our tyres is going to be a struggle, that's for sure.

"We're all in the same boat," he admitted. "I don't really know how far the tyres will go, but when it gets a bit cooler, generally they can go a bit further, because they work in a slightly different range. I hope this is still exciting somehow."

A couple of drivers, most notably Esteban Ocon, have not done any running on the mediums thus far.

According to Pirelli, the most likely strategy is a two-stopper, but with the track not having been used for F1 since 2013 and no running on Friday, it admits that strategy is something of a question mark for all the teams. Adding to the tactical complexity is the fact that it could be wet – and it will certainly be cold – making it even harder to accurately predict tyre behaviour.

Theoretically the quickest way will be to start on the softs, then on lap 19 switch to the mediums for 22 laps, and finally do a 19-lap stint on the softs again. That said, this combination of compounds can be used in any order.

Second-fastest is another two-stopper: one 18-lap stint on the softs plus two 21-lap stints on the mediums.

Slower is a one-stopper, going from medium to hards after 29 laps (or the exact opposite, running 31 laps on the hard before going to medium). The data suggests that a one-stop strategy using medium and soft is not possible.