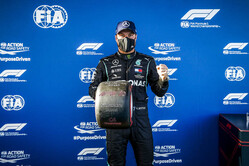 Track temperatures were the coldest seen all year during a race weekend, with 10 degrees ambient and 17 degrees of track temperature at the end of qualifying. Even cooler conditions are likely tomorrow, and there is a high risk of rain as well. Getting the tyres up to temperature (particularly the fronts) and keeping them there will be crucial: especially if there is a safety car.

Track evolution was influenced by the track not having been used yesterday and no rubber laid down, with conditions still 'green' and slippery.

Formula 1 hasn't raced at the Nurburgring since 2013 and there was no running on Friday, so the teams and drivers headed into qualifying and the race with much less experience and information than they would normally have.

The lack of information will have a big impact on strategy. The race strategies are much less clear cut than usual, as it's really not clear which strategy is most advantageous in real world conditions.

The evolution of the cars and tyres since the last time F1 went to the Nurburgring meant that the all-time track record, set by Michael Schumacher back in 2004 (1m28.351s) was already broken by most of the field in FP3.

The most likely strategy for the 60-lap Eifel Grand Prix is a two-stopper, but with the track not having been used for Formula 1 since 2013 and with no running yesterday, strategy is something of a question mark for all the teams. Adding to the tactical complexity is the fact that tomorrow could be wet - and it will certainly be cold - making it even harder to accurately predict tyre behaviour.

The theoretically quickest way will be to start on the P Zero Red soft, then on lap 19 switch to the P Zero Yellow medium for 22 laps, and finally do a 19-lap stint on the soft again. As usual, this combination of compounds can be used in any order.

Second-fastest is another two-stopper: one 18-lap stint on the soft plus two 21-lap stints on the medium.

Slower is a one-stopper, going from medium to P Zero White hard after 29 laps (or the exact opposite, running 31 laps on the hard before going to medium). The data suggests that a one-stop strategy using medium and soft is not possible.

Mario Isola: "Finally we saw some action at the Nurburgring, with the drivers heading into qualifying with just one hour of preparation. As a result, there are a number of question marks heading into tomorrow's grand prix, as Formula 1 hasn't raced here since 2013 and the teams have very little data to go on. As well as strategy, one of those question marks surrounds the weather, which is set to be even colder and possibly wet tomorrow. If it stays dry all the top 10 on the grid will start on the soft tyre, which removes one variable, but what happens after that very much remains to be seen. In these extremely cold temperatures, we saw some light graining in the morning as expected but as more rubber was laid down on the track and the cars adapted their set-up, the situation improved. Looking after the tyres tomorrow will still be crucial, in what should be quite an unpredictable grand prix with uncertain weather."