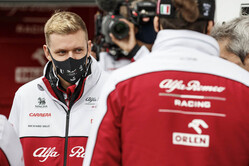 Despite not getting any running in, Mick Schumacher insists that simply attending today's practice sessions with Alfa Romeo was "very useful".

Like fellow FP1 debutant, Schumacher was forced to sit-out today's opening practice session, which was abandoned - as was the subsequent session - due to the weather conditions.

Nonetheless, the youngster, who is currently leading the F1 championship, insists he learned from the experience.

"Obviously I would have loved to be able to get out and drive," he told reporters. "Nevertheless, I think it's great to be here, to get the opportunity to speak with the team, go into the meetings and work with the mechanics, work with the engineers, and obviously also see the fans.

"I'm also very sorry for the fans who don't get to see us drive," he added, "but in the end, safety comes first.

"It's very useful for me," he continued. "I managed to get as much experience as I can from this weekend and that was really the focus for me.

"It would have been great to get some data for the team as well, but again it was great for me to get the knowledge to see how the team works, to see the philosophy of an F1 team on a race weekend, so therefore I'm very happy."

It's thought that the youngster may now have to wait until the season finale in Abu Dhabi to make his debut.

"We don't know what the future holds," he said, "but hopefully I'll get to drive a few laps again."

During the second session, Schumacher was seen talking to Sebastian Vettel, who proudly showed him his tribute helmet inspired by his father, who secured the first of five titles with Ferrari almost twenty years ago to the day.